Shut Down Line 5 - No Tunnel

Every day, nearly 23 million gallons of oil flow through two aging pipelines in the heart of the Great Lakes known as Line 5. Not only does Line 5 put the Great Lakes at enormous risk from an oil spill, the oil carried by this pipeline once refined and burned creates a huge carbon spill into the atmosphere. 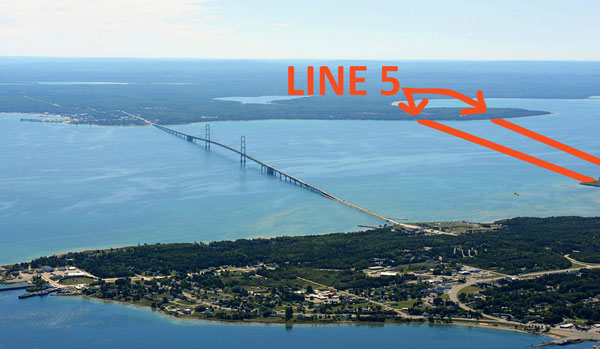 Enbridge, a Canadian-based oil transport giant that owns and operates Line 5, is now attempting to replace the pipeline with an oil tunnel that would carry millions of gallons of climate-harming fossil fuels every day through our state for up to 99 more years. There is no doubt that extending the life of this pipeline would exacerbate climate change and the impacts we are already experiencing in Michigan.

The Michigan Climate Action Network is working hard to shut down the Enbridge Line 5 oil pipeline and stop the proposed oil tunnel.

To build a tunnel, first Enbridge needs approval from the US Army Corps of Engineers and Michigan Public Service Commission (MPSC). MiCAN has teamed up with attorneys at the Environmental Law & Policy Center to intervene in this case and make sure the impacts this new oil infrastructure would have on the climate are considered.

Michigan can be the first state to shut down an oil pipeline. While pipelines are federally regulated, Line 5 is unique because it crosses the Great Lakes bottomlands, so Enbridge holds an easement from the State of Michigan for the use of the Great Lakes public trust resource. Enbridge has violated this easement multiple times and Michigan's Governor, Attorney General, and legislature have a legal pathway to shut down Line 5.

In November 2020, Gov. Whitmer ordered the shut down of Line 5 by May 2021, but Enbridge continues to illegally operate this pipeline and is fighting to block her action.

President Biden can shut down Line 5 by revoking the Presidential permit for Line 5.  Click here to use your voice and send Biden a tweet or call him.

Get more involved with the campaign to Shut Down the flow of oil in Line 5 with our partners at the Oil & Water Don't Mix Campaign.