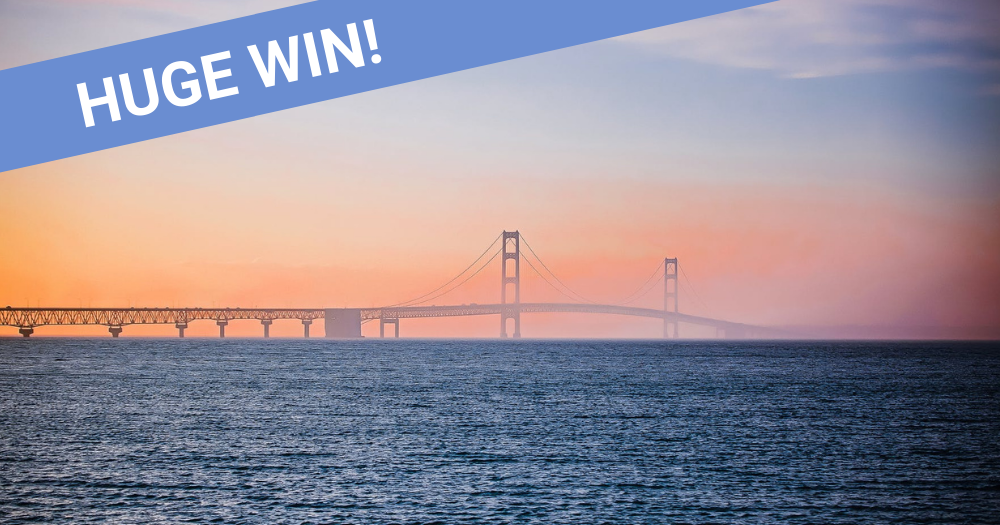 Today, the Michigan Public Service Commission (MPSC) ruled that climate change considerations may be included in Enbridge’s Line 5 permit hearing. The Environmental Law & Policy Center (ELPC) and the Michigan Climate Action Network (MiCAN) filed an appeal with the Commission after Administrative Law Judge Dennis Mack ruled against them in February. ELPC and MiCAN argued they should be allowed to demonstrate how the climate emergency impacts of Line 5 are significant and unacceptable and must be considered in a meaningful environmental review of the siting permit request before the MPSC.

“This is an important win for everyone who cares about the climate crisis,” said Kate Madigan, Director of the Michigan Climate Action Network. “We applaud the Commissioners for including evidence of climate change in their review of the proposed oil tunnel. In this time of climate emergency, leaders must consider climate change in all decisions - especially in decisions about building pipelines that would carry millions of gallons of oil every day for up to 99 years."

“The Commission’s decision reflects the fact that Michigan’s environmental protection act was written so that state agencies recognize our evolving understanding of the environmental impacts of permitted actions,” said Margrethe Kearney, Senior Attorney at ELPC. “The Commission correctly recognized that they are required to look at the full scope of environmental impacts from projects like Enbridge’s proposed tunnel and oil pipeline underneath the Mackinac Straits.”

Even though the MPSC ruled it will consider climate change in the Enbridge permit case, the Canadian oil company has been ordered on May 13 or sooner to stop operating Line 5 under the Straits of Mackinac. That order stems from Gov. Whitmer’s notification last fall that the State was revoking and terminating Enbridge’s 1953 Easement for the Dual pipelines.

ELPC and MiCAN are intervening in the Enbridge Line 5 permit hearings to make sure the MPSC has a more complete set of data regarding the need for a new tunnel and pipeline, as well as the environmental and climate impacts of the proposed project. The tunnel and new pipeline are intended to replace Enbridge’s damaged 67-year-old pipeline under the Straits of Mackinac that carries 23 million gallons of oil every day and already threatens to release oil and natural gas liquid into powerful currents that could carry contaminated water for miles in every direction.

MiCAN is a Traverse City, Michigan-based statewide network of organizations, groups, and
individuals working to build and mobilize a powerful grassroots movement in the Great Lakes
state to call for clean energy solutions, climate stability, and climate justice.