Science for the People - U of M Chapter 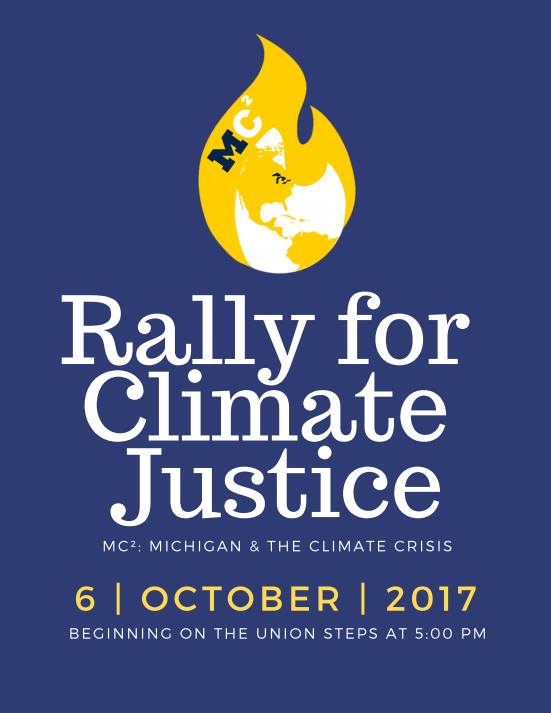 Science for the People having a climate rally as a part of the MC2 Bicentennial Event and would like to invite your organization to join us. Our goals for this rally are twofold:

The world’s most marginalized groups of people will feel the effects of climate change the most. The Global South, a large part of it in the Tropics, will bear a large burden of the consequences of climate change, despite not being major contributors. Specifically, island-nations in this region will feel the effects of climate change. The recent hurricane, Maria, ravaged the Caribbean. The U.S. Virgin Islands and the American colony of Puerto Rico are examples of how extreme natural disasters caused by climate change will be, and how political uncertainties interact making relief efforts from Developed Countries fall short. We want to explicitly link how climate change plays into the political arena, more so how wealthier high carbon emitting countries impact the Global South. We want the University of Michigan to commit to contributing to relief efforts for countries affected by natural disasters, especially relief efforts for Puerto Rico and the U.S. Virgin Islands.

The climate rally will start on the steps of the Michigan Union at 5pm on Friday, October 6. We will have a few speakers, and from there we will walk over to the Office of the President (503 Thompson Street) to protest in front of Schlissel’s office. Participants are encouraged to bring signs and posters to carry.

Organizers will also be collecting donations to contribute directly to the Hurricane Maria Community Relief & Recovery Fund hosted by The Center for Popular Democracy. All proceeds will be directly managed by an assortment of grassroots organizations in Puerto Rico and used to support efforts of immediate relief and equitable rebuilding.