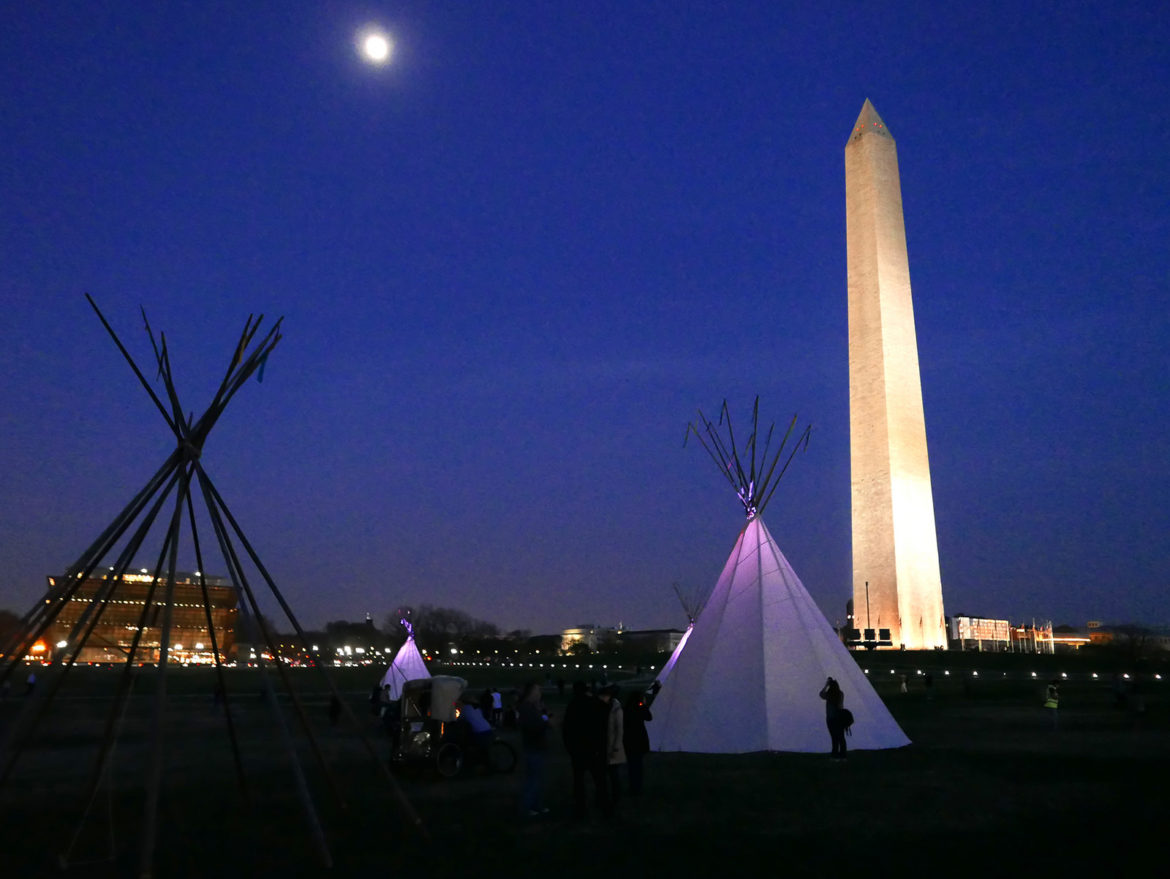 And for years, Whyte — a member of the Potawatomi Nation — has written about indigenous perspectives on broader issues with fossil fuel development and climate change.

A professor of philosophy and community sustainability, Whyte also holds the Timnick Chair in the Humanities at MSU and is affiliated with the university’s American Indian & Indigenous Studies and Environmental Science and Policy programs.

This year, Whyte has published essays and scholarly articles on how the Dakota Access project represents what he describes as an ongoing form of U.S. colonialismover Native Americans.

He recently spoke with Midwest Energy News about pipeline issues in the region, including Enbridge’s controversial Line 5 that operates through the Straits of Mackinac.

Midwest Energy News: For some, colonialism was a difficult period in U.S. government/Native American relations hundreds of years ago, but you say it’s an ongoing issue in light of the Dakota Access pipeline. How is fossil fuel development, and oil pipelines in particular, a modern form of colonialism?

One way to understand colonialism in the United States context is it’s an active effort on the part of the U.S. government to erase indigenous peoples’ ways of life. Some of the most recent pipeline projects are set up in ways to erase our nations, governments, sovereignty, cultures and histories. They are set up in ways that almost assume that we either don’t have ancestral lands off-reservation or that they don’t matter to us.

Another problematic assumption is that changes to the landscape for pipelines somehow don’t alter the landscapes that are important for our well-being. -Kyle Powys Whyte.

During the Dakota Access review process, was there simply a fundamental misunderstanding on the part of the government and the pipeline developer about what represented areas with cultural significance to the tribe?

It absolutely is a misunderstanding. With DAPL, there are at least three environmental issues. The first is the risk posed to water quality. The second is whether pipeline construction would destroy sacred sites or burial grounds. The third is the impact of the project itself to the overall landscape that is meaningful to Lakota people and members of the Standing Rock tribe.

Oftentimes, pipeline builders and investors think the responsibility to tribes is to protect water quality or the environment or replace land that might be lost due to constructing the project. Or they think it’s just their responsibility to avoid destroying sacred sites.

While those responsibilities are important, it’s also their responsibility to consider the fact that if you’re a native person, or any human being, a huge part of being able to live in an area is that it reflects culture, history. The Standing Rock tribe is constantly subject to plans of other parties, such as the U.S. government or business interests. Over time, something like a pipeline going through land that’s ancestral, an imprint on the Standing Rock tribe, affects how members see themselves as people. It’s reflected in a culture that’s not their own and economic interests that aren’t their own.

What’s your response to those — including high-level U.S. officials — who maintained that the tribes were consulted throughout the Dakota Access process, or that they didn’t voice their concerns at the appropriate time?

I’ve read in detail the fact-finding in (U.S.) District Judge Boasberg’s decision and have reviewed carefully what a lot of different high-level people have said about the consultation process. Did the Army Corps of Engineers actively try to fulfill its responsibility to consult the tribe? Yeah, it did. In fact, you see the Army Corps took great pains to contact the tribe in advance.

But the issue goes deeper than that. If you look closely, you find the tribe not only expressed at different points that it was not interested in the pipeline, it’s also the case that the tribe really does not have the capacity to consult with agencies and corporations with much more resources and funding than the tribes do. That’s not to say tribes shouldn’t be at the table because they don’t have the capacity, in fact it’s the opposite.

In addition to court cases, how do you see challenges to the Dakota Access and Keystone XL pipelines playing out?

One of the areas coming out again, which is not necessarily a new issue but maybe has a different face, is that these pipeline projects and many mining projects are an affront to indigenous peoples’ religious freedom.

Native people standing up for their rights to enjoy these types of landscapes and ecosystems are at the basis of their rights to exercise religious freedom. I think that’s the issue — the importance of landscapes that reflect part of a bigger worldview — and that’s going to be a key energizing point for a lot of advocacy.

What were your expectations of the Trump administration and how are they playing out in terms of its relationship with Native Americans?

On the one hand, the Trump administration seems to think [Dakota Access and Keystone XL] provide so many jobs and so much economic opportunity that that consideration itself overrides any rights federally recognized tribes might have. That’s problematic because not only are the job numbers contested and debated, I also don’t think that if they’re as big as they are that we want to live in a society where it’s OK for one group of people because of jobs to literally deny basic rights to others. The U.S. would never tolerate that with another country, so why are they engaged in that themselves?

Also, the Trump administration has not taken any effort I have seen to show that pipeline projects are good for issues that concern tribes: economic development and the restoration and resurgence of tribal sovereignty.

Earlier this year, the Bad River Band of Lake Superior Chippewa in Wisconsin voted to not renew right-of-way easements for Enbridge’s Line 5 on tribal land. What role could tribes play in the region and in Michigan in potentially closing Line 5?

You’re seeing, especially in light of DAPL, tribes working together to stop non-consensual pipeline development. For Michigan tribes, there are really good reasons to think [Line 5] poses risks to some of the most important bodies of water not only in the Great Lakes, U.S. and Canada, but also to indigenous people living in the Great Lakes for time immemorial.

For indigenous-led movements, there is a lot of energy in the Great Lakes region to take direct action on water protection. I could see a water-protection movement targeting the issue of Line 5 occurring here as it did with DAPL.

Another issue is that the route of Line 5 is certainly something connected to water quality issues that would affect a major treaty area. No different than how the Standing Rock tribe sees DAPL as a treaty rights issue, these tribes should also make Line 5 a treaty rights issue.

What’s your impression of how the state of Michigan has been handling the concerns and calls to shut down Line 5?

What I would ask the state is: How many efforts have they taken to actually learn from and engage with how native people think about the water? Has the state taken the steps to really be part of events where native people can communicate to members of the state and others in Michigan why water is so important to them?

For tribes, so much of why Line 5 is an issue has to do with the history of connections between Anishinaabe people and water and political struggles to protect water in the 20th century and now the 21st century. I’d argue the state really needs to be taking the responsibility of doing the right thing with respect to Line 5 as part of the overall political reconciliation the state needs to do to create better relationships.

As a more general matter, there is tension within some tribes between those who seek the payments stemming from fossil fuel development and those seeking to protect the land. Is there a way to resolve that tension?

Oftentimes when people look at this issue, they don’t look at the deeper history of how it is that tribes got into that situation. Historically, obviously, none of our societies or nations were dependent on fossil fuel sources of energy. Now for some tribes it is part of their economy. If you look at the history, it deliberately re-engineered tribal governments in ways so that tribes really didn’t have a choice. As a result of that re-engineering, it created tribes with significant support for fossil fuel development.

The problem is, that’s a distraction in many tribal communities we didn’t intend to have and didn’t create. It diverts from focusing on more important issues like sustainable energy, cultural revitalization and rebuilding communities. If people are going to take the issue seriously, they can’t look at tribes as different on that issue. People and nations were re-engineered by the U.S. to favor fossil fuel extraction — that’s not something we ever wanted to have happen in our societies.