The American Legislative Exchange Council has long been hostile to policies designed to advance clean energy. A group of Michigan conservatives are seeking a new approach.

Clarification: The Conservative Energy Network establishes “common ground policies” among its 20 member states, but it does not tell them which policy positions to adopt. The network does not have a position on a recent net metering ruling in Michigan.

A Michigan conservative energy group is making inroads with the American Legislative Exchange Council (ALEC) in an effort to get the controversial fossil fuel-linked group to adopt clean energy policy positions.

“When people today think of the Republican party, unfortunately they think of fossil fuels or ‘drill, baby, drill,’” Pischea said. “This is something we’re working to change more broadly among conservatives in every place we gather. ALEC is one example of that.” 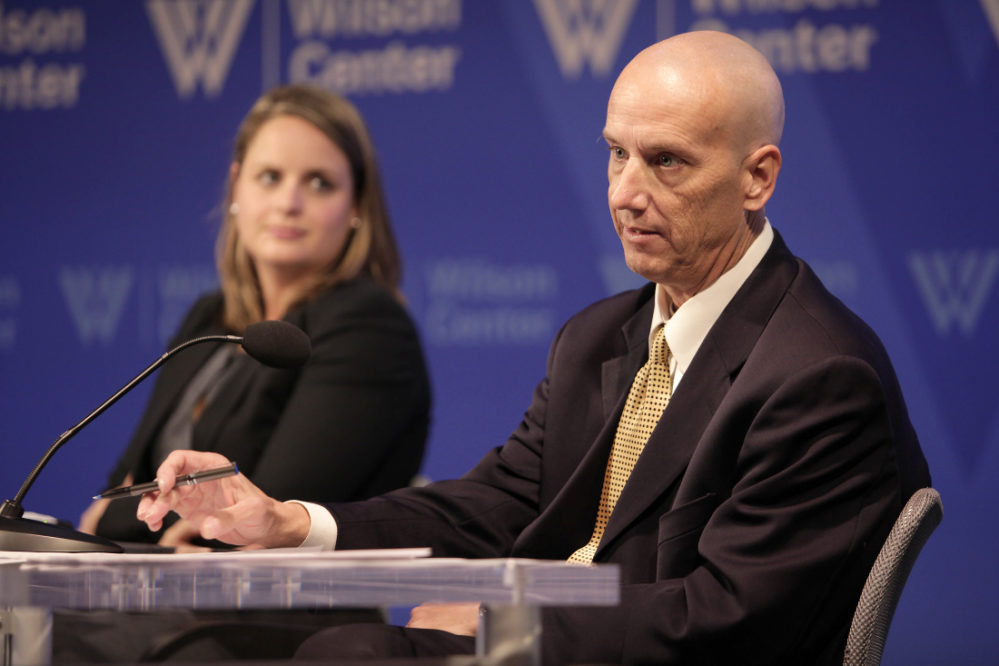 The group’s approach will focus on free markets and competition — central pillars of ALEC’s platform — to encourage clean energy development.

ALEC members meet a couple of times a year to discuss policy positions on a variety of issues. ALEC’s board ultimately votes on resolutions and model policies, which lawmaker members attempt to pass in their own states. ALEC members represent the public and private sectors, and critics say the group gives corporations outsized influence over the legislative process.

In recent years, though, climate change and clean energy have been increasingly divisive issues within ALEC. In 2014, major companies including Google, Facebook, Microsoft and eBay all left ALEC over its position on climate change.

Pischea, a Republican political strategist, says resisting growing public support for clean energy is a political risk for conservative groups. Rather than backing policies like renewable energy standards, the Conservative Energy Network supports opening market access to independent producers in regulated states like Michigan so they can compete with monopoly utilities.

The Michigan Conservative Energy Forum, the first affiliated group of the network, also criticized last week Michigan regulators’ replacement program for net metering, saying it will discourage rooftop solar. The Conservative Energy Network, which includes teams in 20 states, seeks to establish “common ground policies” among its affiliates but it does not tell them which policies to adopt. The network does not have a position on Michigan’s net metering ruling.

“At ALEC, the obvious policy construct is anything around free markets,” Pischea said. “Approaching clean energy from a market-based perspective is a sweet spot for ALEC and the place of competition is a place they ought to be.”

Pischea said his group will be “rolling out the concept” on Friday (ALEC denied Midwest Energy News’ request to attend Friday’s meeting.) Pischea’s panel will also include Republican pollster Glen Bolger from Public Opinion Strategies and officials with the free-market advocacy groups Reason Foundation and Mackinac Center for Public Policy.

Pischea noted ALEC voted down three key resolutions last year. He characterized two as opposing Property Assessed Clean Energy financing for residents, while the third would have called upon the U.S. Environmental Protection Agency to withdraw its 2009 endangerment finding that six key greenhouse gases “threaten the public health and welfare of current and future generations.”

At the time of the resolutions, E&E News reported on a “climate civil war brewing” at ALEC over clean energy issues and climate change.

However, ALEC’s adopted policy positions over the years have largely supported fossil fuel development over renewables.

In 2014, ALEC commissioned a report and adopted a resolution on net metering calling for fixed charges “or other rate mechanisms” to recover costs from distributed generation customers. The resolution makes the disputed claim that net metering customers’ grid usage costs are being subsidized by all other ratepayers — a position also typically held by major utilities. The group has also adopted policies for states to withdraw from regional climate initiatives, supporting offshore oil drilling and making renewable energy standards voluntary.

Grant Kidwell, director of ALEC’s Energy, Environment and Agriculture Task Force, says three policies currently before the energy task force are up for consideration: A resolution opposing subsidies for electric vehicles; model legislation to support stamps on gas pumps that show how much consumers pay in taxes per gallon; and model legislation calling on Congress to give states more control over oil and gas production.

“We’re for all sources of energy,” Kidwell said. “We want there to be a level playing field so no source is subsidized. With respect to the grid, we are source-neutral as much as possible.”

‘We’re a threat to the good-old-boy relationship that has allowed utilities and fossil fuels to thrive at that venue.’
Pischea, echoing a speech he gave in Lansing last month, said conservatives’ approach to clean energy until now has been “dominated by a lack of education and cronyism. Hopefully we represent an opportunity to disrupt both of those things.

We’re a threat to the good-old-boy relationship that has allowed utilities and fossil fuels to thrive at that venue.” - Mark Pischea, President, Conservative Energy Network

Kidwell responded that competition is “something that’s emerging” to support clean energy development. He said an issue like net metering — where ALEC and the Michigan Conservative Energy Forum have opposing positions — shows “we have diverse member perspectives. We like having a debate, whether it’s from the Michigan (Conservative) Energy Forum, utilities or nonprofits.”

“My take on net metering is it tends to impose the government into a situation,” Hayes said. “I understand the argument that it helps to diversify markets, but I see net metering as effectively subsidizing the use of solar energy.”

Last month, the group Documented published a list of ALEC members received through a public records request that attended a July 2017 ALEC conference. Members from Michigan included nine state lawmakers, AARP, Amway and the state director for Americans for Prosperity.

Kidwell was also a policy analyst for the Charles Koch Institute, and then Americans for Prosperity, from May 2011 to December 2017.

“It’s not just us,” he said, citing groups like ClearPath and growing corporate interest in clean energy from ALEC member companies like FedEx and UPS. And fossil fuel giants BP and Occidental Petroleum are among the companies that have left ALEC over the group’s position on climate change. Pischea has said the Conservative Energy Network is “agnostic” on climate change, which is deliberately excluded from the group’s policy platform.

“There’s an opportunity to address both the politics and policy of clean energy in a way that will allow a light to go off for conservatives lawmakers — that there is opportunity for them on this issue,” Pischea said.

“You can have a strong economic base, viable industry and still have very clean water and clean air and healthy wildlife populations,” Hayes said. “All of that is possible at the same time.”

Story by Midwest Energy News and used with permission.