On the outskirts of Traverse City, Michigan, sitting in the middle of farmland off M-72, is a giant lonely wind turbine that, in addition to electricity, produces a sense of pride for Jim Carruthers.

As a private citizen in 1996, he helped push for construction of this now-iconic structure, at the time the largest operating wind turbine in the country.

Today, he is mayor of this 15,000-plus-population (and growing) tourist town off the shores of Lake Michigan. He recently helped make news for Traverse City by setting a goal of powering all its city operations with renewable energy by 2020. Along the way toward that goal, though, he’s discovering the costs are higher than anticipated, including a surcharge for a new solar array.

But he’s taking the long view on this issue, and others. Carruthers recently vowed, along with a few other Michigan mayors, to fulfill the requirements of the Paris Climate Agreement, with or without the cooperation of the federal government. 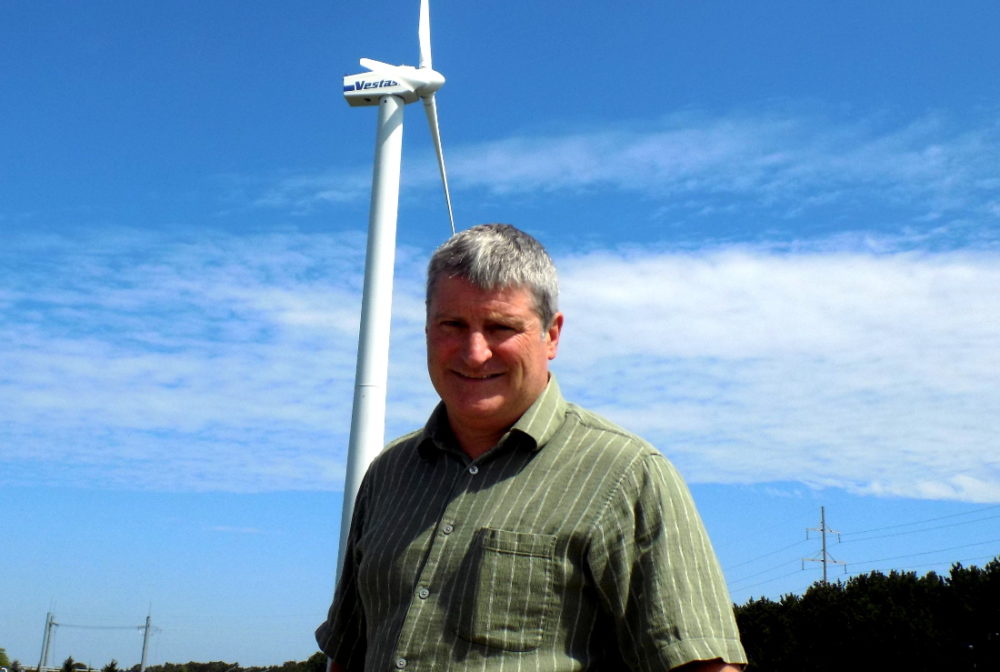 Carruthers recently spoke with Midwest Energy News about his career of green energy activism, lessons of the past, and goals for the future. The following is an edited transcript.

Carruthers: One of my starts in the political arena was advocating for the first municipal-grade wind tower to be placed here in Traverse City up on M-72 Hill. A group of us got together and we were lobbying Traverse City Light & Power (the city-owned utility) to think about renewable energy because we were pretty much a coal and nuclear, dirty energy based company other than the dams we had on the river.

As a private citizen, I was working at the regional land conservancy at the time and environmental policy, land protection was how I got my start in Traverse City. Right around 1996, we advocated for Light & Power to consider doing this renewable energy program with the wind towers. It was all about cost. They said they wanted us to figure out a way to get people to pay more for their energy costs to make this happen. So we developed the idea of a “green rate.”

Light & Power said, “Get us 200 customers or ratepayers to agree to pay a little bit more for their energy and we’ll go ahead with it.” So, we said, “Well, give us your mailing list.” So, within two or three weeks, we sent out a letter approved by the Light & Power board, to their ratepayers, and within two weeks we had 200 people, with a wait list of 25-50 people.

Was that surprising to you at the time?

For the green rate, we convinced people to pay $11 more a month for their energy. Sadly, we didn’t do more than just one tower. It produced about 1 percent of our needs, which isn’t much, but at least it was a start and it was groundbreaking for a small community to have the first municipal-grade wind tower placed here in Traverse City.

So, fast-forward to somewhere around 2010. You’re a City Commissioner representative on the board of Traverse City Light & Power.

I advocated during our strategic planning to set a goal for ourselves to be 30 percent renewable by the year 2020. Biomass became one of the easier routes to make that goal happen. Some fought us, some didn’t, but we had lots of public discussions, with hundreds of people arguing over whether biomass is a good source of energy production, because of tree removal. But we were talking managed crops. We are a forestry industry state. We felt that we could manage this. People put out there that we were going to cut all the trees down, burn them up and then put bad things into the air.

It ended up failing. Do you think that was a failure to communicate with the public properly?

It was a little of everything. Definitely Light & Power has always struggled with marketing and PR issues. Power companies do what they do because they can, and they just go ahead and plow through and push what they want, and that kind of pisses people off. So whenever a power company speaks, they want to push back a little bit because they’re kind of Big Brother to a lot of people.

So, after 2010, in the meantime, you hit reset and tried to figure out where to go from here?

We started focusing on other opportunities. We did a Granger Landfill gas capture program, which we still do and is a green renewable, but landfill gas has an end date. You can buy gas that’s being emitted from our landfills, but as time goes, it slows down and you get less and less.

And then we also bought into (Heritage Sustainable Energy Founder and CEO) Marty Lagina’s first project down in McBain near Cadillac. We invested in five utility wind towers down there. Frustratingly, our director at the time convinced us to buy too much too soon. So, we’re paying top dollar for the wind energy we have in our portfolio at Light & Power now, which is why we’re hesitant with this more recent proposal with the 1 percent solar array because it’s the same provider, but it’s kind of at a higher-end cost.

It was sticker shock for a lot of us. We support it, but we know that renewable energy pricing is going down. So why are we paying at the top level? So, that was the controversy over the more-recent policy. But what led up to that was the idea of going 100 percent renewable by 2020.

Why the sticker shock over the Heritage Sustainable Energy solar plan? You were planning on efficiency and not necessarily a rate hike?

Well, I was planning on efficiency. A majority of our goal was efficiency and conservation.

Do you see this goal right now as a demonstration project because it’s good for government to set an example?

When we set our 30 percent renewable goal by 2020 at Light & Power a bunch of years ago, we were setting a standard higher than California at the time. We really got aggressive about it. But it is very important to have your leadership believe in this and to give the public the impression that this is a good thing.

If you accomplish your goal by 2020, Traverse City will be among the first cities in the state to reach 100 percent?

I think we’re up to six or eight cities in the state that have done this, and then there are cities all over the country that are doing this, and a lot more jumping onto these ideas since the current president pulled out of the Paris Climate Agreement. A lot more people are becoming aware of not wanting to step backward, but continuing to move forward, and working together with all of our partners in the world to produce a common goal and try to make it work.

You were among the Michigan mayors who pledged to uphold the Paris Agreement locally. In a way, is Donald Trump helping to shore up local commitment to green energy?

In a way. We’re all reactionary on many levels. So, having someone really push you makes you jump on to certain issues quicker than not. Not that we’re going to make major change, but within Traverse City we’ve set goals for ourselves. We have been pushing for more renewable power and changing the way we live to meet the kinds of goals that are in the Paris Agreement, so to me it was a no-brainer. We’ve already been doing this. I’m willing to jump onboard with the mayor of Ann Arbor and the mayor of Grand Rapids, and let’s continue on. Let’s not go back in time, let’s move forward because we have to change the way we produce our energy if we want to be giving this world to our children and to our children’s grandchildren.

So, to you, it’s not so much about saving money, but it’s more about the larger global warming issues.

It’s always been, for me, how to save the planet, how to be green, how to produce less pollution. Our motto at the Conservancy was “saving land for the future generations,” We can’t just always think here and now and be selfish about what’s happening in our lifetime. Our lifetimes are very short on this planet. We’re talking hundreds of years down the line.

Assuming we make the goal, and it sounds like we probably will, the 100 percent by 2020, what’s next, and what are the stakes for Traverse City?

Well, I think expanding upon that goal, I think, and then taking it beyond just city operations. I went into this thinking it was all about energy production, which is what I’ve been pushing for. But we’re still 90-plus percent old-school dirty generation. We’re almost 100 percent power purchase. We purchase almost everything except for our peaker plants and our wind towers. But we need to get Light & Power onboard in doing more with solar and wind and all the renewable options. They all cost money, and we have to figure it out.

I’m sure you pass by that windmill on 72 a lot. Do you look at it sometimes and think, “I helped do that. That’s kind of cool.”

Oh yeah. I’m very proud of my activism in this community. I’ve gotten involved in some controversial issues and I think we’ve come a long way and are doing the right thing, whether it’s energy production to human rights to the environment, everything. I live here, too. Our growth has been exciting. It’s challenging. We have all the right problems in Traverse City. We fight over parking spaces, bike lanes, and tall buildings. If that’s all we have to fight over, we’re doing OK.

This article is reposted from Midwest Energy News with permission.