A group with millions of dollars in undisclosed donations says state policy makes “private renewables” bad for low-income residents and communities of color.

Nonprofit advocacy groups linked to DTE Energy are waging a public campaign to significantly reduce the amount customers are paid for their solar power, in line with the utility’s request before Michigan regulators.

While these groups — classified as 501(c)(4) social welfare organizations — have been prominent in statewide elections and lobbying lawmakers on behalf of utility interests, the latest involves policy decisions at the Michigan Public Service Commission. 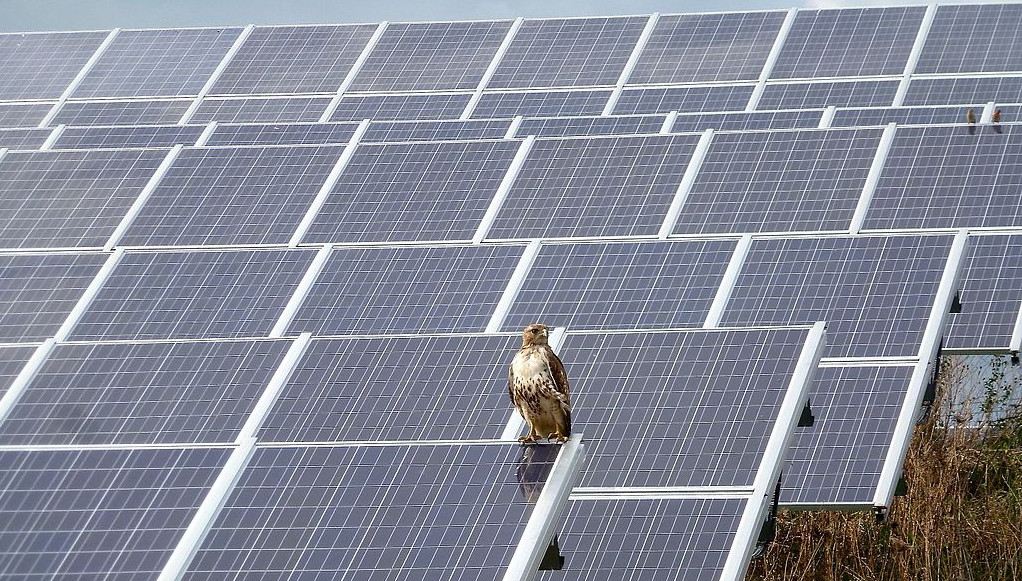 For the past two years, regulatory staff, clean energy advocates and utilities have wrangled over an appropriate level of compensation for those who send solar power back to the grid. Under net metering, they receive bill credits at the retail rate of power. Energy laws passed in 2016 with bipartisan support directed the MPSC to study the costs and benefits of net metering customers and require utilities to file new distributed generation programs. DTE is the first major utility to do so.

DTE and its allies say net metering customers are being subsidized by all other ratepayers for their cost of using the grid. DTE proposes compensating customers for excess power at wholesale rates along with a monthly fee, similar to utility efforts in other states to curtail net metering.

Its supporters also say net metering unfairly disadvantages low-income residents who can’t afford their own solar panels, another strategy utilities have carried out in other states.

Solar advocates dispute these claims and have called DTE’s proposal “outrageous.” Critics of the utility campaign contend that the benefits net metering customers provide more broadly to the grid have not been fully studied in Michigan, such as helping reduce demand during peak periods in the summer and lower costs for all customers. Advocates also note that in the same rate case DTE is proposing to increase average residential rates by 9.1 percent, with low-income customers being hit the hardest. Net metering customers made up 0.12 percent of DTE’s 11,000-megawatt load in 2017.

State regulators are expected to rule on the case in the coming months.

The groups have websites backing DTE’s position on net metering and other issues before the MPSC, such as avoided costs. Michigan’s Energy Promise touts the benefits of “universal renewables” like solar and wind farms over “private renewables” like rooftop solar. (These terms were coordinated under a 2014 project by the national utility trade group Edison Electric Institute.) 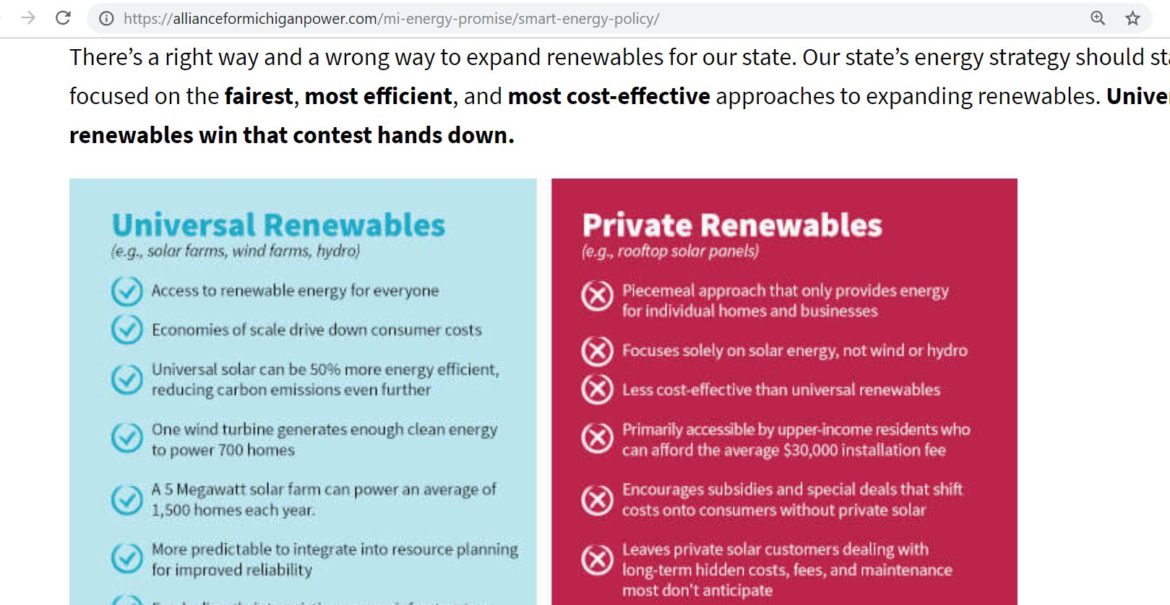 This screen capture from the Alliance for Michigan Energy website shows the terms “universal renewables” and “private renewables,” which have been promoted by a utility industry trade group.

Michigan Energy First was created in 2014. Tax filings from fiscal year 2017 list the group’s president as Renze Hoeksema, who is also DTE’s director of state government affairs; and its treasurer as Theresa Uzenski, the utility’s manager of regulatory accounting. A third official is Eric Doster, an attorney linked to a similar advocacy group funded by Consumers Energy.

DTE spokesperson Peter Ternes said DTE is “part of the Alliance for Michigan Power coalition.” Hoeksema and Uzenski “serve in an advisory capacity” on the organizations’ boards, he added, and the groups approach DTE “to provide information” about issues.

“I think they’re wanting to make sure accurate information is getting out to the public,” Ternes said. “I think it’s clear they’re supporting issues that align with the utility industry.”

Since 501(c)(4) organizations don’t have to disclose their donors, watchdog groups have criticized them as “dark money” entities advocating for utility interests.

The groups are also well-funded. Consumers contributed $43.5 million to Citizens for Energizing Michigan’s Economy over a recent four-year span, including $20 million in 2017, for issue advocacy. Consumers maintains the funding comes from shareholders, not ratepayers.

Earlier this year, the MPSC clamped down on Consumers’ contributions to these nonprofit entities, blocking the company from contributing to any 501(c)(4) for at least 18 months.

Doster disputes the characterization of these organizations as “utility front groups,” adding that Michigan Energy First, for example, advocates on a variety of issues, including auto insurance reform. He says attacks against the groups are attempts to “limit free speech.”

Michigan’s Energy Promise also frames the net metering issue around fairness, mirroring utility efforts in recent years telling low-income residents and communities of color that the policy harms them most. The group has allied with groups like the Detroit branch of the NAACP, the Arab American and Chaldean Council, the Urban League of Detroit and Southeast Michigan and various churches and faith-based groups. (In 2017, the national NAACP urged members to advocate net metering in Michigan.)

“It’s a wide and broad coalition, including leaders in specific communities in Detroit that need the most help so they’re not easily preyed upon,” said Michigan Energy Promise spokesperson Ron Fournier. “Specifically African American ministers who are tired of people coming into their community selling them services and contracts they don’t need.”

Fournier is the president of Truscott Rossman, a high-level public relations firm in Michigan that represents other utility-linked groups.

Michigan’s Energy Promise claims some solar companies exploit the elderly and poor with offers, and that rooftop solar harms first responders’ ability to respond to emergencies in homes.

In a recent op-ed published in Bridge Magazine, Bishop W.L. Starghill Jr. called net metering an “energy inequality.” Starghill is with the Michigan Democratic Black Caucus and a representative for Michigan’s Energy Promise.

“The private solar lobbyists in Lansing are pushing for a system that allows private homeowners to put a Cadillac-style energy system on their rooftops and pass the bill for maintaining the roads on to the rest of us,” he wrote.

Contention over race, equity and solar power is not unique to Michigan. In Illinois, ComEd formed a solar advocacy alliance aimed at helping low-income residents while the utility pushed controversial legislation. Duke Energy used similar tactics in North Carolina to support the company’s campaign against rooftop solar, which drew pushback from at least one African-American minister.

“It appears evident that this ‘solar hurts the poor’ strategy has been coordinated by Duke and its cohorts in the corporate electric power industry and used in many states recently,” the Rev. Nelson Johnson wrote in a 2015 letter to Duke’s president and CEO. “This cynical corporate activity is an affront to the people of this state, and it is your personal responsibility to stop it.”

Other community advocates say arguments over cost-shifting are “disingenuous.”

‘This cynical corporate activity is an affront to the people of this state.’

“What they’ve put forward in the rate case is really egregious,” Koeppel said. “With the formation of this new front group and framing it so solar is fair to all customers is completely disingenuous.”

In interviews with Energy News Network in recent weeks, multiple Detroit advocates voiced frustration over DTE’s unwillingness to partner on community solar projects, which would provide clean energy access to renters in particular.

Michigan Interfaith Light and Power delivered a letter to Gov. Gretchen Whitmer in January asking her for state agencies to intervene in the rate case and oppose DTE’s proposal.

“This whole idea that somehow independent solar producers are being subsidized or are doing this on the backs of the poor is just baloney,” she said. “You don’t have to look far for proof that if they actually cared about the poor they wouldn’t be proposing these massive rate hikes that will hit low-income customers the hardest.”

Wiste added that attempts to portray net metering as a social equity problem is “exploiting some class and racial divides.”

After 2016, the Legislature directed the MPSC to study the cost of service for solar customers. It agreed that an inflow-outflow model that charges solar customers for using the grid at retail rates (inflow) and credits them for the power sent back (outflow).

However, there wasn’t a consensus at the time on what the outflow rate, or value of the solar sent back to the grid, should be. (Existing net metering customers will be grandfathered for 10 years.)

DTE contends it should be at the lowest wholesale rate of power — the locational marginal price — because solar customers need access to the grid 24/7, and there isn’t a defined amount of power they will send back compared to, say, an independently owned hydro station that would be credited at avoided costs under the federal Public Utilities Regulatory Policy Act (PURPA). The company also wants a “system access charge” based on the size of the installation.

DTE says net metering households each shift $444 to $1,700 annually to other customers. At the end of 2107, DTE had 1,705 customers enrolled in net metering, according to the MPSC. By DTE’s calculation, the annual net metering subsidy ranges from $757,000 to $2.9 million annually. DTE has 2.2 million electric customers.

In the rate case, MPSC staff support the inflow/outflow model but with a compensation rate about 25 percent less than retail, much higher than DTE’s request. This is known as the power supply component of retail rate, minus the cost of transmission.

Rob Ozar, the MPSC’s assistant director of energy resources division, estimated the average net metering customer’s subsidy — or less revenue that the utility takes in — to be about $225 annually, though that could vary based on system size and energy usage. Additionally, MPSC officials have said there isn’t enough data to accurately quantify whether net metering customers provide a net benefit to the grid. Advanced meters should help in providing clearer data on grid usage.

“We’re thinking of this right now as a transition charge until some years down the road when we have really good data and can do more sophisticated analysis to determine the marginal avoided cost,” Ozar said.

Environmental groups have argued that net metering should remain in place while the outflow question is settled.

An administrative law judge is expected to issue a ruling this week, ahead of the full commission’s decision.

The case hits on an issue followed closely by Commissioner Dan Scripps, who was appointed in February by Gov. Gretchen Whitmer. Scripps is the former president of the Institute for Energy Innovation, which published a report in 2017 that concluded Michigan’s net metering program provides a net benefit to ratepayers.

“Customers with rooftop solar systems are not only paying their fair share, they’re actually helping to reduce costs for their neighbors as well,” Scripps said in a statement at the time. “Specifically, the benefits of solar DG exceed the retail cost of electricity and the value of solar is greater than the compensation solar DG customers receive under net metering programs.”

MPSC spokesperson Nick Assendelft said bylaws do not specify circumstances in which a member would recuse themselves. He added that no one has requested that Scripps do so in the case.

“Mr. Scripps has a deep knowledge of the highly specialized energy landscape. His decisions in cases before the MPSC will be fair, fact-based and impartial,” Assendelft said.

“I would dispute any out-of-state special interest who says net metering is fair to all ratepayers. That’s demonstrably untrue,” he said. “The only green these people care about is money.”

Becky Stanfield, Vote Solar’s senior director of Midwestern states, responded: “The money that we care about is the money that DTE wants to take from Michigan families — including thousands of our in-state members — to line the pockets of its corporate shareholders.

“DTE’s anti-competition, anti-consumer rate proposal is exactly why the overwhelming majority of Michiganders want affordable solar options to reduce their reliance on the monopoly utility. These misleading, hysterical attacks from DTE’s new dark money front groups are a desperate attempt to preserve their profits and their outdated monopoly business.”