This is the first city in Michigan to commit to a community-wide 100 percent clean energy goal. 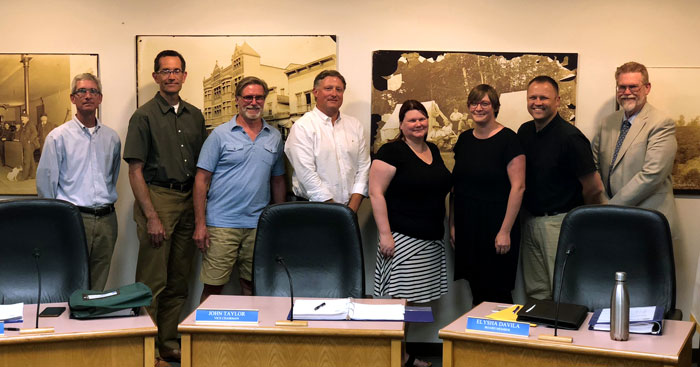 Traverse City Light & Power Board after the historic vote

“Cities are where we are seeing the leadership we need on clean energy in the U.S., and Traverse City is showing that Michigan cities are ready for 100 percent renewables with this goal,” said Kate Madigan, Energy and Climate Specialist with the Michigan Environmental Council and Director of the Michigan Climate Action Network. “A transition to 100 percent clean energy is possible, necessary, and will bring many benefits. We applaud Traverse City for setting this goal, and hope this leadership will inspire other cities, utilities, and our state leaders to work for a more rapid shift to clean energy.”

“I’m proud that Traverse City is the first city in Michigan to commit to 100 percent clean energy,” said Traverse City Mayor Jim Carruthers. “It is past time for our state to make major investments in clean energy, and cities can lead the way. This bold clean energy goal is consistent with our reputation as a leading green city, which helps draw talent and visitors to our region.”

Please give now to make this work possible. Donate Now

“Investments in solar, wind, and energy efficiency are the most logical choices for this utility to meet the 100% renewable energy goal. The economics of these choices are now very competitive to traditional generation sources,” said Tim Arends, Executive Director of Traverse City Light & Power. “Now that the board has approved this goal, our staff will create an action plan to start the work toward achieving it.”

“It is past time for our state to make major investments in clean energy, and cities can lead the way." - Traverse City Mayor Jim Carruthers

In 2016 the Traverse City Commission set a goal to power 100 percent of its city operations with renewables. Expanding this goal to be community-wide, which includes homes and businesses, required the approval of the TCLP board. The city commission’s goal also called for creating a plan for getting the community to be carbon neutral by 2050, which includes heating and transportation.

“This goal was made possible by our community coming together in support of a future that we all want to see,” said Dan Worth, Energy Policy Director for the Groundwork Center. “It is our hope that this goal will bring more clean energy projects to our region, which will mean new jobs, investments in our local economy, which will bring many benefits to our region.”

“Moving to 100 percent clean, renewable energy will reduce pollution, save lives, and reduce health impacts and expenses for Michigan families, especially those living in communities near power plants. This is something our company cares about,” said Bob Sutherland, owner of Cherry Republic, a business with operations in Traverse City.

Across the U.S. some 75 other cities already have set a community-wide 100% goal, and that number keeps growing. Madigan noted that achieving 100 percent renewables will reduce pollution, including about 200,000 metric tons of carbon dioxide each year. It also will add more clean energy jobs to our region. Already, Michigan’s clean energy workforce employs over 122,000 people – that’s more than all the wait staff, lawyers, computer programmers, and web developers in the state combined.

"Across the United States, cities are switching to 100 percent clean energy because it means less pollution, lower energy costs, and more jobs in a growing industry. While Traverse City may be the first in Michigan to make this commitment, it surely won't be the last. We look forward to working with Traverse City to realize an equitable transition to 100% clean electricity and to carry this vision for our communities across the state," said Jordan Chrispell, Sierra Club's West Michigan organizer.

“This goal was made possible by our community coming together in support of a future that we all want to see,” - Dan Worth, Energy Policy Director for the Groundwork Center

Organizations, businesses, and community members across Traverse City have shown support the 100 percent goal by speaking up at board meetings and sending letters to board members. Michigan Environmental Council, Groundwork, and other groups are now partnering with community foundations to work with the city and TCLP to engage community members to gather input on how to meet this clean energy goal.