Traverse City on Monday pledged to power itself entirely with renewable power in just four years, adding significant momentum to a growing list of cities leading the transition to clean energy with 100 percent goals.

The resolution adopted by the Traverse City Commission sets a goal to meet all electricity needs for city operations with renewable sources by 2020. City operations include things like city buildings, streetlights, traffic signals and water treatment facilities and make up 3 to 4 percent of total electricity use in the Traverse City area. The resolution defines renewable energy as wind, solar, geothermal and landfill gas. 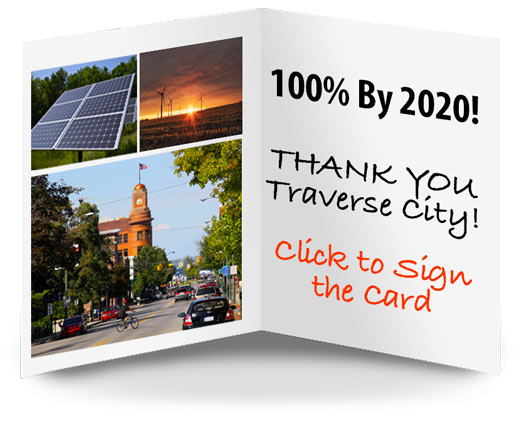 "Renewable energy is the right direction for our city. It creates jobs, reduces pollution, and will help keep energy prices low,” said Traverse City Mayor Jim Carruthers. "Traverse City is nationally known for being a great place to live and visit because of our thriving downtown and our amazing natural resources. Setting forward-looking renewable energy goals matches with our reputation as a leading green city in Michigan and the nation."

Traverse City joins two other Michigan communities with similar targets: Grand Rapids has a goal to use 100 percent renewable energy by 2025, and the Village of Northport finalized a plan this year to go fully renewable. If it accomplishes its goal by 2020, Traverse City will be the first city in the state to reach 100 percent renewable electricity for city operations. Nationally, about 20 communities have set all-renewable goals, and three have already hit the mark.

“This is a huge step forward for our city and one that I hope will inspire other communities across Michigan to embrace 100 percent clean energy goals. This is a positive response to climate change and a way to bring local benefits to their community,” said Kate Madigan, a Traverse City resident, energy specialist for the Michigan Environmental Council and director of the Michigan Climate Action Network (MICAN). “ I’m proud to be part of this community, and I can’t thank Mayor Carruthers and the City Commission enough for providing such strong leadership.”

"With a president-elect who claimed climate change is a hoax and a Congress that has been slow to embrace a clean energy economy, real change is going to have to start at the local level. It’s wonderful to see Traverse City stepping up and setting a great example for other communities.” - Dan Worth, Policy Specialist, Groundwork Center for Resilient Communities

The Traverse City announcement is also a big win for MICAN’s new 100% Renewable Cities campaign to swell the ranks of Michigan communities officially committed to—and actively pursuing—a target of 100 percent clean energy by midcentury. MICAN’s broader vision is for all of Michigan to be powered entirely by renewables by 2050. A growing body of research shows that shifting to 100 percent renewable energy is feasible and will produce many benefits, including stabilizing the climate, creating jobs, boosting economic growth, keeping energy rates lower over time, and reducing pollution—which would save lives, improve health, and reduce healthcare costs. 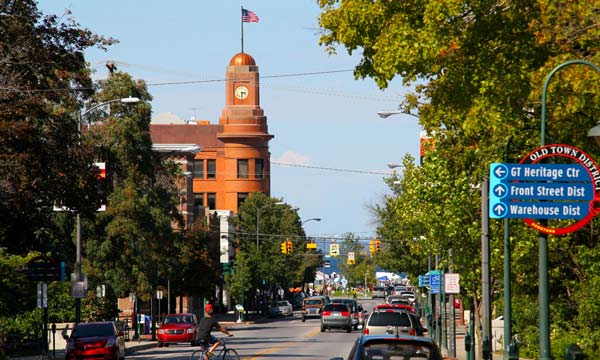 The idea for a 100 percent renewable energy goal was brought to the city by a group of community members and organizations, including Citizens Climate Lobby, Groundwork Center for Resilient Communities, Michigan Environmental Council, MICAN, Michigan League of Conservation Voters, NMEAC, SEEDS, and TC350.

“Transitioning to 100 percent clean energy is going to create jobs and make for a more durable local economy that’s protected from future spikes in energy prices,” said Dan Worth, clean energy policy specialist for the Traverse City-based Groundwork Center for Resilient Communities. “With a president-elect who claimed climate change is a hoax and a Congress that has been slow to embrace a clean energy economy, real change is going to have to start at the local level. It’s wonderful to see Traverse City stepping up and setting a great example for other communities.” 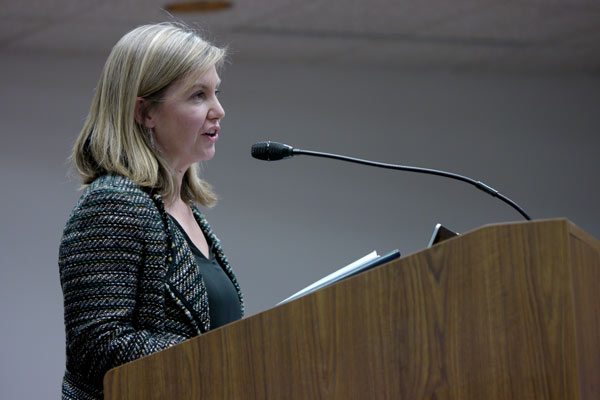 This resolution also sets a goal of launching two clean energy or other greenhouse gas-reduction projects annually and calls for the creation of a “Green Team” to advise city officials on sustainability efforts and craft a plan for Traverse City to become carbon neutral by midcentury. Several states, cities, and universities are now beginning to develop plans and set goals to become fully carbon neutral by midcentury, which is what scientists agree is necessary to avoid the worst consequences of climate change and sustain a livable planet.

“Traverse City is leading by example by passing this resolution,” said City Commissioner Tim Werner, who also is a board member of TCLP. “We are focusing first on getting enough renewable energy to provide the electricity we are responsible for. By doing so, we hope to inspire the community as a whole to embrace more renewable energy.”

Express your thanks to the Mayor and Commissioners of Traverse City for their bold leadership. Sign the Thank You Card now!