Dan Worth of Groundwork Center for Resilient Communities - a MICAN member organization - doesn’t really care what the president tweets about climate change. For the nonprofit, based in Traverse City, Michigan, it is at the local level where economics trumps ideology.

Groundwork’s philosophy is that it’s possible to transcend politics when building support for renewable energy infrastructure development. It is what Executive Director Hans Voss calls a “yearning for the chance to work together at the community level to achieve tangible results,” which has been a focus for the group for the past couple of years, since they redefined their mission and changed their name from the Michigan Land Use Institute.

Dan Worth, a policy specialist at Groundwork, has big ambitions for building Michigan’s new energy infrastructure. Midwest Energy News sat down with Worth recently to discuss his background and ambitious plans.

Midwest Energy News: Tell me about your background. How did you get here and why?

Worth: I grew up in Newton, Massachusetts, just west of Boston, and then went to college at U-M down in Ann Arbor. While I was there, I got bit by the environmental bug a little bit. Graduated from there, moved back to Boston for law school at BU School of Law, where I was going to be an environmental lawyer. But I found out when I got to law school that there was not much by way of training or offerings for environmental law. 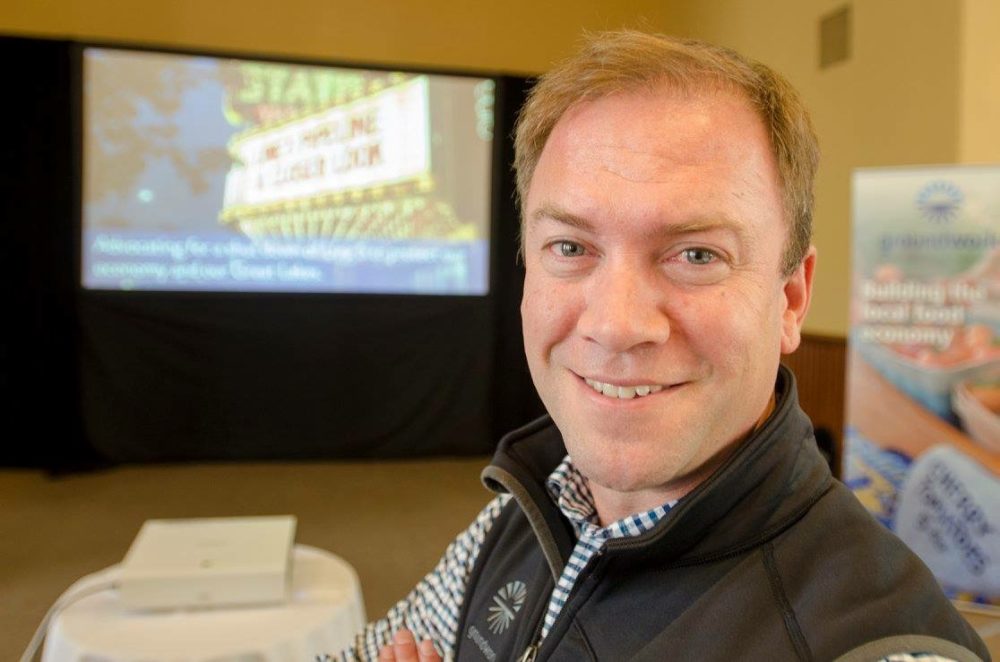 We started a nonprofit organizing grad students around projects. The undergrads can dump coal on the chancellor’s lawn all they want but if somebody doesn’t have a solution, and one that provides a little bit of free labor and some legwork, it’s not going to come. So, we started a program where the graduate students, themselves, can work on campuses. If you’re an engineering student, you can look at the electrical engineering, if design student, look at the buildings, if a law student, look at policies.

For you, personally, why energy and environment? Why not go where the money is?

East Coast liberal parents who would never have stood for that. Being in Ann Arbor felt like being in an East Coast bubble.

In Leland, where I am and our kids go to school, there are probably three times as many Trump signs as Hillary signs. That was disturbing as an East Coast liberal, but at the same time I started to listen as to why those were there. The Department of Energy gives grants to Ann Arbor and East Lansing. They don’t trickle up here, so why would they trust the Fed that doesn’t give them much, but requires a lot? I get it.

With all the hunting up here, is land conservation a conservative value?

I think it is. Even with the wind turbines and wind farmers who lease their farms to big energy companies. There was a study of what the folks who leased their land thought about climate change. It turned out more than half of them didn’t believe in climate change or that it existed, but here is this great economic opportunity to lease their land for a wind turbine. So they didn’t really care. You didn’t have to have that conversation.

"We’re figuring out a way to create a local energy infrastructure that is bipartisan, that works for low- and middle-income as well as for wealthy vacationers." - Dan Worth, Energy Policy Specialist, Groundwork Center for Resilient Communities

Michigan Gov. Rick Snyder’s predecessor, Jennifer Granholm, was big on creating incentives for renewable energy. Snyder, not so much. What’s your relationship with the state government?

It’s mixed. The state government could do more. In some states, the state government is clearly leading and providing incentives and trying to get everybody to do renewables and efficiency. I think Michigan’s hard, where you have such an infrastructure for the fossil fuel industry. And not just in-state. You have the transportation network to get the coal from Wyoming to here. So you have this enormous infrastructure built up. It’s a really hard switch to do to get to renewables.

I think there’s not enough support for communities and others to do big things. And that’s something that I miss about Massachusetts. I saw it work in California that really jump-started things. In Michigan, we don’t have that.

We started with something two years ago called Groundwork Shines. We were just the sales and marketing arms to get solar out to everybody. We focused on Traverse City and Frankfort, two communities that were moving that way anyway. We went door-to-door, community events, church events. And so we got a couple hundred people talking about going solar. The first install in any neighborhood is the most important because everyone walks by and wants the cool new thing on the roof. And so we tried to sprinkle ourselves into every neighborhood.

That worked really well, but our new thing is working with entire communities. Traverse City has been pretty progressive on energy, has had some progressive leaders, but how do you actually get to 100 percent? What does a commitment like that mean or look like? We’re trying to fill in the blanks.

Is the jobs argument true? Are there real jobs available with renewables?

Huge. It’s huge. The beautiful jobs piece is the efficiency and renewables on homes and neighborhoods—electricians, roofers, finance people who are working on those projects. The stories are true. These jobs are growing five times, 10 times as fast as other industries.

And then the renewables argument doesn’t have to be about climate change and global warming. It’s local jobs, local infrastructure that you’re building, local education and training. It’s very difficult to say no to that.

Frankfort and Traverse City, those are models. But as we develop them, the whole idea is to replicate them. So, Suttons Bay is interested, Northport is really far ahead, Manistee is really interested, Charlevoix, Petoskey, Harbor Springs. We get to those city leaders and then everyone gets it, everyone’s excited.

If there’s a local solution that makes their community better and saves money, why would they say no? It stops being partisan, which is a lot of what Groundwork is focusing on. It’s super hard these days, but I feel like energy is this bridge, it’s this conversation-maker. We don’t have to fight. We don’t have to put up yard signs. We put up solar arrays.

Where do you see yourself in five years? What are you heading toward? More of a regional organization?

Can we scale this up? The 10-county area has 300,000 people, 100,000 housing units, 50,000 businesses. My goal may be unrealistic, but can we get a gigawatt of efficiency and renewables, enough to cover the entire 10-county area and in the process create thousands of jobs and have this money flowing back to local communities. And then once our region has done it, then go down to Lansing and say, ‘Hey, look at how effective this is and look at all the benefits.’ Rural, red Michigan loves this and so does urban liberal Traverse City.

And then I see that resonating nationally. Here’s a confusing state. The liberals can’t understand how they lost. We understand it and we’re figuring out a way to create a local energy infrastructure that is bipartisan, that works for low- and middle-income as well as for wealthy vacationers.

My hope is really big, that we create a rural model that the USDA loves and the Department of Energy loves, that meshes with something India and China are doing rurally.

"The beautiful jobs piece is the efficiency and renewables on homes and neighborhoods—electricians, roofers, finance people who are working on those projects. The stories are true. These jobs are growing five times, 10 times as fast as other industries." - Dan Worth

So your ambition is way beyond Michigan?

It is, but I think the community here thinks that way, too. And then the other piece is make this a hub for this kind of work. Make this the Rocky Mountain Institute of Michigan. Make this the Boston Green District of Michigan, where people who are looking for these solutions come up here.

This article was republished from Midwest Energy News with permission.