Property values surge in Michigan counties with wind energy – but why?

Agricultural land was the only property type in Michigan to have increased in overall value since 2008 and through the Great Recession, according to a report last month by Bridge Magazine.

In particular, areas that have seen significant wind energy development — such as Gratiot County and Michigan’s “Thumb” region — have also had some of the greatest property value increases, according to the analysis.

While the reasons for those increases are complex, some energy analysts and researchers are quick to suggest that the correlation with wind farms may not be coincidental

While Eichler Clark and her colleagues at the Lansing-based consulting firm 5 Lakes Energy (where she is also a partner) have been looking at wind development’s impact on overall tax revenues for the communities where they’re located, Bridge’s analysis appears to focus solely on a property’s value, not including other taxable features on them like wind turbines, said Stanley “Skip” Pruss, a senior fellow at 5 Lakes. 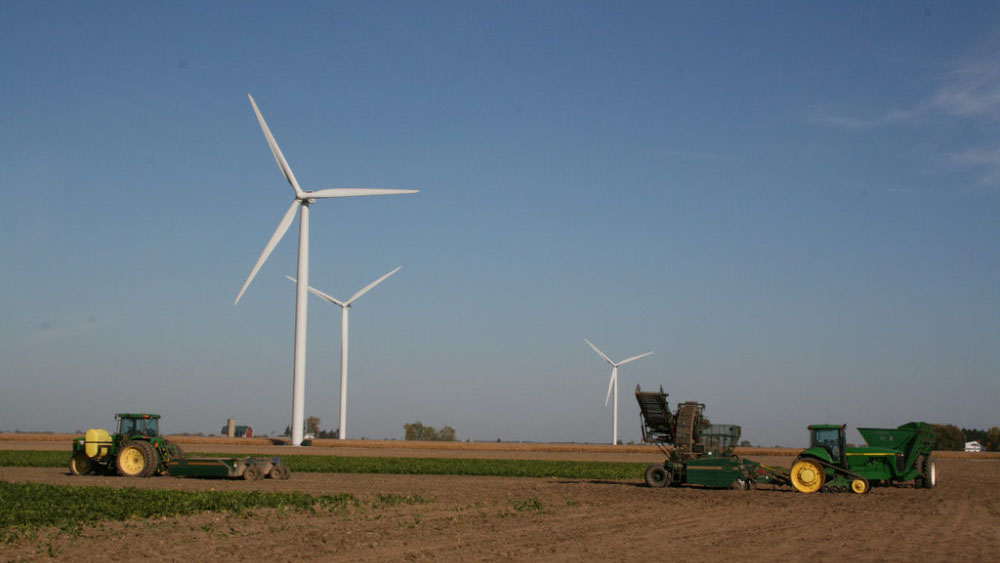 Therefore, while wind development is credited for increasing communities’ tax base, the Bridge report says rising commodity prices of corn, sugar beets and soybeans are the primary reason for increased agricultural property values. Properties where wind turbines are not located have also increased, noted Nancy Heck, treasurer and assessor of Winsor Township in Huron County, known as Michigan’s “wind capital.”

But this is where Pruss and others say wind development’s direct impact on property values is at least unclear and in need of more detailed analysis.

Pruss — who directed the state Department of Energy, Labor and Economic Growth and served as the state’s Chief Energy Officer under former Gov. Jennifer Granholm — says most local assessors are not documenting how much overall property tax revenue is generated because of wind turbines. In Michigan, developers pay industrial personal property taxes on turbines, which Pruss says is part of a property’s overall value.

“I’m not suggesting (property values) are inaccurate in any way on the numbers, but what is confusing to me is that we know precisely the amount of revenue attributed to industrial personal property taxes, specifically for wind turbines. We have that data, those are big numbers,” Pruss said. “If there is confusion, it’s not about the dollar amount, it’s confusion on what it’s attributable to.”

5 Lakes has been tracking tax revenue from wind development in multiple communities across Michigan.

“The counties that host the largest number of turbines by far — by far — have the largest increase in total taxable value of property in their jurisdictions,” Pruss said.

Four counties that hosted the most wind turbines in 2014-2015, he added, saw more than $45 million directed to communities in those areas.

“These are agricultural counties,” Pruss said. “That’s a huge amount of money that went to operating budgets, townships, counties, police and fire.”

Also, if rising commodity prices are creating more revenue for farmers — and opportunities for land investment — couldn’t the same be said for land lease payments from wind turbines?

“Probably,” Heck said. “But they’re not making that much money off of windmills, they’re making more money off of commodities.”

Sarah Mills, a postdoctoral fellow at the University of Michigan’s Center for Local, State and Urban Policy, has surveyed farmers in the Thumb on this very question and others about wind’s impact on Michigan farmers.

In February 2014, farmers from 14 townships in Michigan were surveyed, and 1,210 landowners responded. Mills found that those with turbines on their property invested twice as much in their farms in the last five years than neighboring landowners without turbines. That included improvements to homes, outbuildings, equipment and drainage or irrigation.

The survey also found that landowners with turbines bought more farmland than others in the past five years, and that they are “more likely to have a succession plan in place for their farm.”

“That was making the case that, first of all, money given to landowners who host turbines on their properties are reinvesting in the community, particularly in the form of improvements to their land,” Mills said. “Those landowners also think they’ll be (keeping) farming land in the future.”

In 2014, lease payments to Michigan landowners for wind turbines totaled $4.6 million, according to the American Wind Energy Association.

One way farmers could increase the value of their property is using wind lease revenues to tile their properties, or adding drainage to prevent little ponds from being created, Mills said.

Speaking to local assessors a few years ago, Mills found anecdotally that it depends where turbines are sited to determine the impact on property values, though she said she hasn’t studied the issue directly.

Ultimately, Mills hasn’t seen any research making a connection between agricultural property and wind development, one way or the other.

“Thinking about residential property values, there’s been a lot of academic research on that showing mixed results,” she said. “People haven’t looked so much at the impact on farm values. This is definitely an area that ought to be studied.”

While communities hosting wind turbines are benefiting from the added revenue, Pruss said a “big deal” moving forward is that the personal property tax revenue from turbines is subject to depreciation tables. For example, 10 years after a project is online, 70 percent of the revenue will have diminished because the asset is worth less over time under Michigan’s tax code, he said.

“One of the problems we foresee is, are these communities exercising sufficient foresight for times when this revenue is diminishing?” Pruss said. “That revenue will fall unless they do explicit planning.”

Still, those interviewed for this story say there’s no question that wind development helped some Michigan communities weather the Great Recession, providing a reliable source of revenue since 2008.

Citing Michigan Department of Treasury data for 2011-2015, the American Wind Energy Association reported last year that in the three Michigan counties where wind development is most active — Gratiot, Huron and Tuscola counties — countywide tax bases increased by 38 percent, 34 percent and 26 percent, respectively. Chandler Township in Huron County, for example, saw its tax base increase by $121 million during that time.

Heck, of Winsor Township, maintains that agricultural property values are determined more by location. But she doesn’t deny the overall impact that wind development has had on maintaining or increasing local revenue, particularly during the Great Recession.

Heck serves on the board of the local library, and “our revenue has doubled because of windmills. They have made a dramatic difference at the library,” including building upgrades she said hadn’t been made since the 1970s.

Wind revenue has also allowed the township to reduce the library’s operating millage and add funds to a rainy day account. The county, road commission and schools have also benefited from the revenue, she added.

In an area of Michigan where increasing wind development has been highly contentious, Heck said she “doesn’t have a problem” with turbines — in fact, she lives on a farm and receives lease payments.

“I also have a windmill a quarter of a mile from my front porch. It doesn’t bother me any,” she said. “I think they’re calming.”

“These communities benefit from the added revenue from these wind developments,” he said. “There’s no question about that.”