“Moving rapidly to 100 percent clean energy is possible and necessary to address the climate crisis we are in,” said Kate Madigan, Director of the Michigan Climate Action Network. “We applaud Petoskey for setting this goal, and we hope their leadership will inspire other cities and our state leaders to work for a more rapid shift to clean energy.”

The Michigan Climate Action Network was part of efforts to pass the 100% clean energy goal in Traverse City last August, and organized a community meeting in Petoskey this January to encourage Petoskey to pass its own ambitious clean energy goal. The meeting was attended by nearly 40 people, including local elected officials. 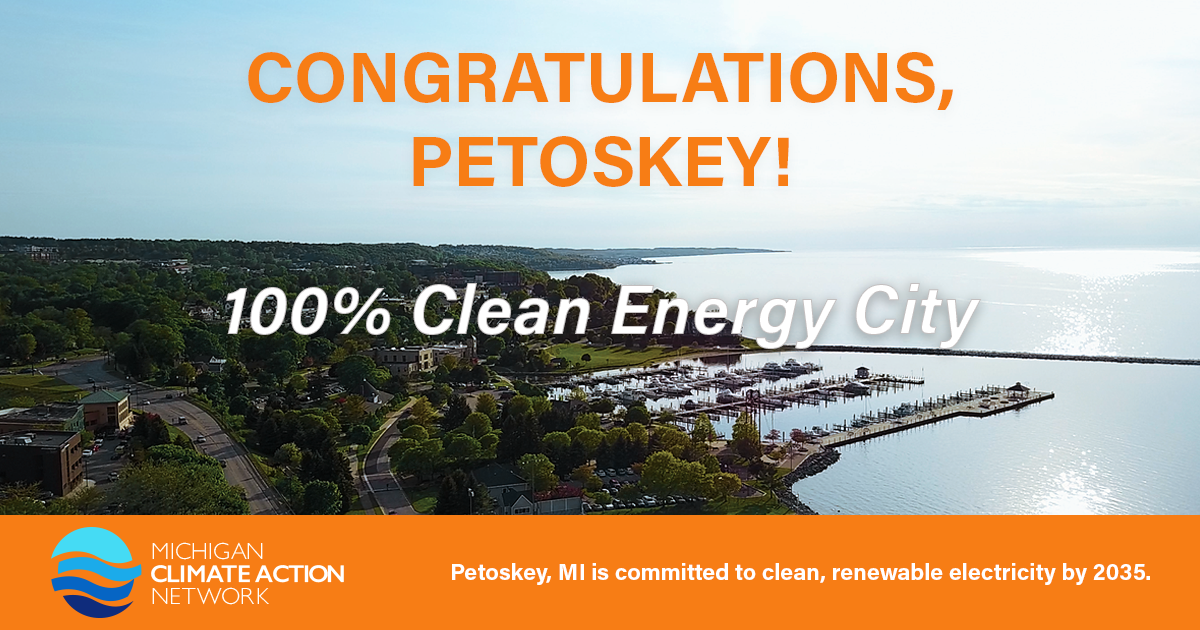 “With this goal, Petoskey joins more than 100 cities in the U.S. working toward ambitious clean energy goals,” said Madigan. “Cities are on the front lines of the impacts of an overheating planet, and are already responding to the increasing floods, wildfires, and intense storms that will only worsen the longer it takes for us to get off fossil fuels. Rapidly cutting their climate emissions is part of their work to prepare their communities for the future.”

More than 100 cities around the world already get at least 70% of their electricity from renewable sources. Only a handful of those are U.S. cities, but in recent years dozens of U.S. cities have set their own community-wide 100% clean energy goals.

A series of reports released over the past year have given more urgency to the need for action to reduce climate emissions, including the United Nations Intergovernmental Panel on Climate Change report released last October. The report found we must reduce global emissions by 45% by 2030 to avoid more severe impacts of warming above 1.5 degrees Celsius.

For more information, and if you would like to work to get your city to set a 100% clean energy goal, visit www.miclimateaction.org.