During the first 100 days of the Trump presidency, the People’s Climate Movement is calling for hundreds of actions around the country. In every corner of the nation, we will be in the offices, meetings rooms, and the halls of power to fight back. A presidential permit was just issued to restart the dangerous Keystone XL pipeline, against all evidence that its construction would set off a "carbon bomb" for our planet and its people.

We will not allow climate deniers to threaten the planet, and we will not allow attacks on immigrants, communities of color, women, LGBTQ and workers to become the new normal. On April 29, we will march for the climate in Washington DC and in Michigan.

Climate Marches are also being organized across Michigan for April 29. Find your city here and RSVP for more information. 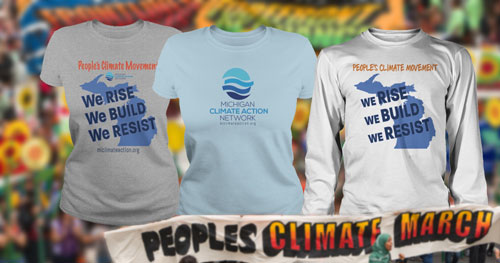 Get your MICAN shirt for the Climate March!

Ride a Bus from Michigan

Buses are now being organized. More information will be posted here when available. RSVP now below and check the I want to volunteer checkbox below to be contacted to help. If you're interested in organizing a bus from your city, check out our bus captain guide.

TC350 has organized a bus from Traverse City and very few tickets are available. The bus will spend the first night in Rockville, MD.

Details and tickets here. This bus is being organized by the Ecology Center and tickets are $110. It will leave Ann Arbor Friday night and will return Sunday morning.

Buses originally being organized with two pick-up points in Westland and Taylor/West Bloomfield and Madison Heights are no longer happening.

Join a trip through Rally Bus, a crowdfunded bus website. If you're looking to go straight to DC and back (and sleeping on the bus both ways!) go to Rally Bus and search for a bus from your nearest city. Currently showing buses from Grand Rapids, Ann Arbor, Kalamazoo, Lansing, Detroit, Traverse City (separate from the other buses listed above). These buses are being organized outside of MICAN - it'll be your responsibility to follow up with organizers. Find a Rally Bus from your city.