Author Bill McKibben says a tunnel deal with Enbridge would undermine the governor’s legacy as a climate and environmental champion.

Environmentalist and author Bill McKibben joined local and national leaders today urging Gov. Gretchen Whitmer not to cut a deal with Enbridge to build an oil tunnel and instead focus on her promises as a candidate to shut down the Line 5 oil pipeline and to be a leader on climate change.

“Gretchen Whitmer understands the climate crisis. So why is she willing to go down in history as the Governor who built the Tarsands Tunnel to help a Canadian fossil fuel company continue its work, which is raising the temperature of the planet,” said McKibben.  “It’s time to put Michigan—and America—to work exploiting the economic opportunity the engineers have provided us by harnessing the sun and wind, instead of burrowing through the earth to extend business, as usual, a few disastrous decades longer.”

"Gretchen Whitmer understands the climate crisis. So why is she willing to go down in history as the Governor who built the Tarsands Tunnel to help a Canadian fossil fuel company continue its work, which is raising the temperature of the planet?" - Bill McKibben, author and founder of 350.org

McKibben, a national climate leader, is a founder of 350.org and author of the recently published book, Falter: Has the Human Game Begun to Play Itself Out? McKibben spoke today during a press conference hosted by the Michigan Climate Action Network in response to Gov. Whitmer’s decision to negotiate an oil tunnel through the Great Lakes for Enbridge.  During her campaign, Whitmer vowed to decommission Line 5 in the Straits of Mackinac and to lead Michigan to do everything it can to mitigate the impacts of climate change.

“Indigenous Peoples are those who least contribute to climate change, and we have safeguarded our traditional lands, territories and resources for millennia,” said Ettawageshik, who spoke for the Indigenous Caucus at the 2015 United Nations Convention on Climate Change in Paris. “We must remember we are here to protect the future for our children, and that means protecting our waters and addressing the climate crisis. We recognize the hope in all children’s eyes and we work so that this hope will remain through the future generations.” 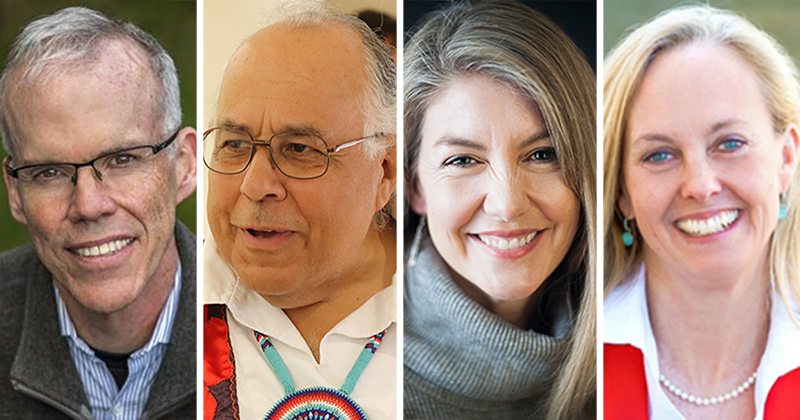 The governor’s decision in April to reverse course and negotiate with Enbridge to build an oil tunnel was widely criticized because of the risks the entire 640-mile pipeline would continue to pose to the Great Lakes and the near 400 waterways it crosses. Line 5 has already spilled 33 times and 1.1 million gallons of oil at in its 66-year history.  The possibility that Michigan’s newly elected Democratic governor may sanction a new oil pipeline also has raised concerns among national climate leaders like McKibben. Building new oil infrastructure is the opposite of what major scientific reports say we must do to avoid severe impacts of climate change, like the IPCC report that calls for cutting climate emissions in half in just 12 years.

“Gov. Whitmer pledged to protect our Great Lakes, which are the source of drinking water for millions of Michiganders, and we are confident she will keep that promise,” said Lisa Wozniak, Executive Director for the Michigan League of Conservation Voters. “A Canadian oil tunnel is a bad deal for Michigan, no matter how you look at it. It will leave the Great Lakes and our state vulnerable to a disastrous oil spill for decades longer, and is the wrong decision for our Great Lakes and economy.”

"Gov. Whitmer pledged to protect our Great Lakes, which are the source of drinking water for millions of Michiganders, and we are confident she will keep that promise." - Lisa Wozniak, Executive Director for the Michigan League of Conservation Voters

Building an oil tunnel would extend the life of the Line 5 pipeline, which transports 23 million gallons of dirty energy products every day. It would almost certainly lead to the rebuilding and expansion of the entire Line 5 pipeline to transport Canadian tar sands oil, the most carbon-intensive oil on the planet.  Gov. Whitmer has another option, which is to decommission Line 5 in the Straits, an alternative that the State’s own studies found to be a viable option that creates jobs, protects the Great Lakes, and would not worsen climate pollution.

“We are already seeing worsening climate impacts with our own eyes, with flooding, polar vortex events, and more frequent and intensifying hurricanes and wildfires across the country. The science is clear: to prevent the most devastating impacts of an overheating planet, we must urgently transition to using clean energy,” said Kate Madigan, Director of the Michigan Climate Action Network. “Gov. Whitmer has the authority to shut down Line 5 in the Straits. This is the fastest way to remove the threat of an oil spill, and it is the best course of action in the midst of our unfolding climate crisis.”