Michigan voters could get last word on Line 5 pipeline replacement

Michigan voters will choose a new governor in November, and in the process they could decide the fate of Enbridge’s Line 5 pipeline.

Outgoing, term-limited Gov. Rick Snyder’s administration continues to work with Enbridge on a plan for a tunnel under the Straits of Mackinac that would carry a replacement for the 65-year-old oil pipeline. 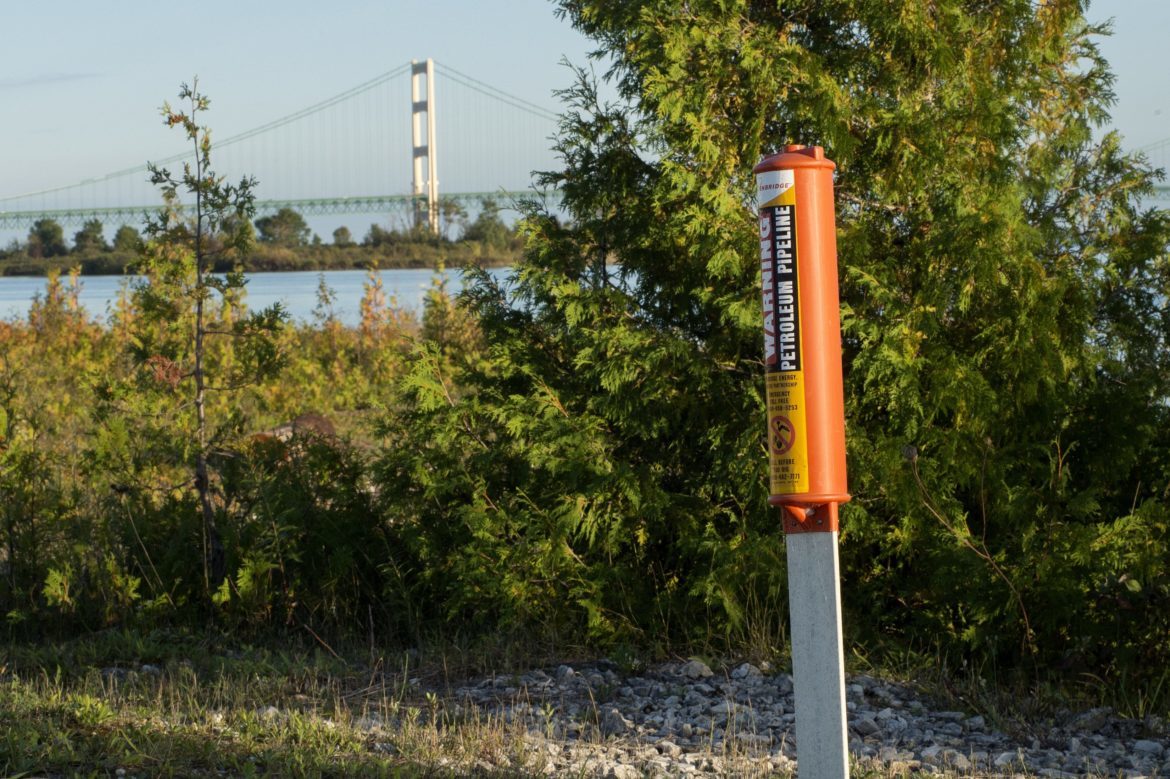 One of the leading candidates to succeed Snyder, Democrat Gretchen Whitmer, has promised to shut down Line 5 if elected. Her opponent, Republican Attorney General Bill Schuette, supports building a tunnel. Several recent polls show Whitmer leading, while the University of Virginia’s Center for Politics calls the race a toss-up.

Snyder had planned to announce a decision by mid-August, though it was delayed as a state-commissioned risk analysis was completed. A spokesperson, Anna Heaton, said it is not determined when the plan will be released or what form it will take, “but we are moving forward with urgency.”

After further studying the issue earlier this year, Enbridge said a tunnel is feasible. The company has reportedly been in discussions with Snyder since at least June. Estimates show the option could cost at least $500 million and take six or seven years to build.

It’s unclear how much the plan will tie the hands of his successor, though experts say it’s unlikely to be binding. Meanwhile, critics want to make sure voters, not a lame duck governor, get the last word on whether the project moves forward.

“[Snyder] has spent his entire last term kicking the can,” said David Holtz, spokesman for Oil & Water Don’t Mix, a group calling for Line 5 to be shut down. “This decision is too important to be made in the last few months of office.” 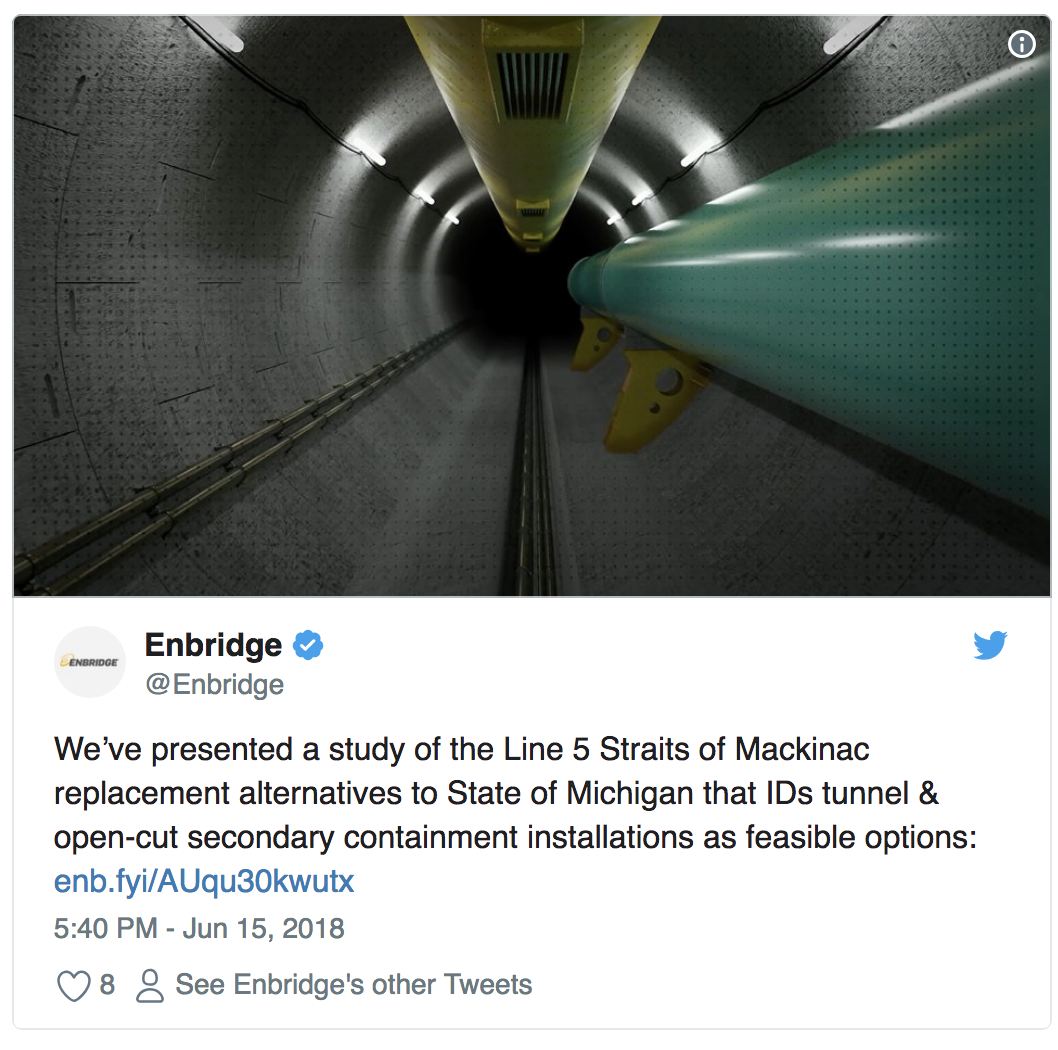 “We have been wrestling with this issue,” said Liz Kirkwood, an environmental attorney and executive director of For Love of Water (FLOW), which has called for the shutdown of Line 5.

She said it would be difficult for Snyder to enter into a new easement with Enbridge based on requirements under public trust law, the Great Lakes Submerged Lands Act and the Michigan Environmental Protection Act.

“I don’t quite know how they’re going to navigate this,” Kirkwood said. “I’m predicting the new agreement will cite the risk analysis report and say the (spill) risk is so great it will justify the tunnel.”

Schuette first said in 2015 Line 5’s “days are numbered.” An anchor strike in April that dented the pipeline further alarmed state officials about the risk of a spill. The draft risk analysis says a worst-case scenario cleanup could cost nearly $2 billion.

Schuette’s office declined to comment for this story. His campaign did not respond to a request for comment.

FLOW also contends that the administration violated the state constitution with a November 2017 agreement with Enbridge by “negotiating with a private entity to prospectively determine environmental harm and permit setting.” The November agreement effectively laid the foundation for Snyder’s upcoming announcement.

“We believe the current agreement is invalid for several reasons,” Kirkwood said. FLOW submitted its comments to the state in July with its claims. “The governor is trying to put a bow on top of this looming disaster that’s been in the making for this past administration.”

Kirkwood said even if the administration did move forward with a tunnel, it would have to apply to do so under the Great Lakes Submerged Lands Act showing there is “no feasible and prudent alternative.”

Snyder’s spokesperson said she could not speak to how the plan would hold up under a new administration because the agreement hasn’t been determined.

Enbridge spokesperson Ryan Duffy declined to comment on the implications of Snyder’s agreement.

“We would not want to speculate on what the state will announce,” Duffy said.

Matt Grossmann, director of Michigan State University’s Institute for Public Policy and Social Research, said he could not recall a similar situation in Michigan state politics, though U.S. presidents have had policies canceled by following administrations. And in Lansing, plans to replace city hall with a hotel were put on hold this year by a new mayor.

“Certainly it’s not unheard of in politics,” Grossmann said.

David Dempsey, a senior advisor for FLOW and environmental advisor to former Michigan Gov. James Blanchard, said Snyder’s plan is unusual. “I’ve never heard of an agreement like this between a Michigan governor and a corporation,” Dempsey said. “They have the authority to do things as lame duck governors, but I think this is pretty presumptuous.”

Each day Snyder doesn’t announce a decision bolsters the significance of the November election as it relates to Line 5.

“There’s probably no more important decision on Line 5 than the one the voters make in November,” Holtz said.

Kirkwood agrees: “The election is where voters will have an opportunity to speak their minds.”

While Republican candidates for governor and attorney general want to replace Line 5 in its existing form, Democrats say they would waste little time in attempting to decommission the pipeline.

Dana Nessel, a Democrat seeking to replace Schuette as attorney general, said, if elected, she would file suit in the Michigan Court of Claims “on day one.”

“Every day that Enbridge Line 5 operates is a horrible day for Michigan residents and our environment,” Nessel said in a statement. “I can’t tell you what Gov. Snyder will do. We all know what he hasn’t done.” 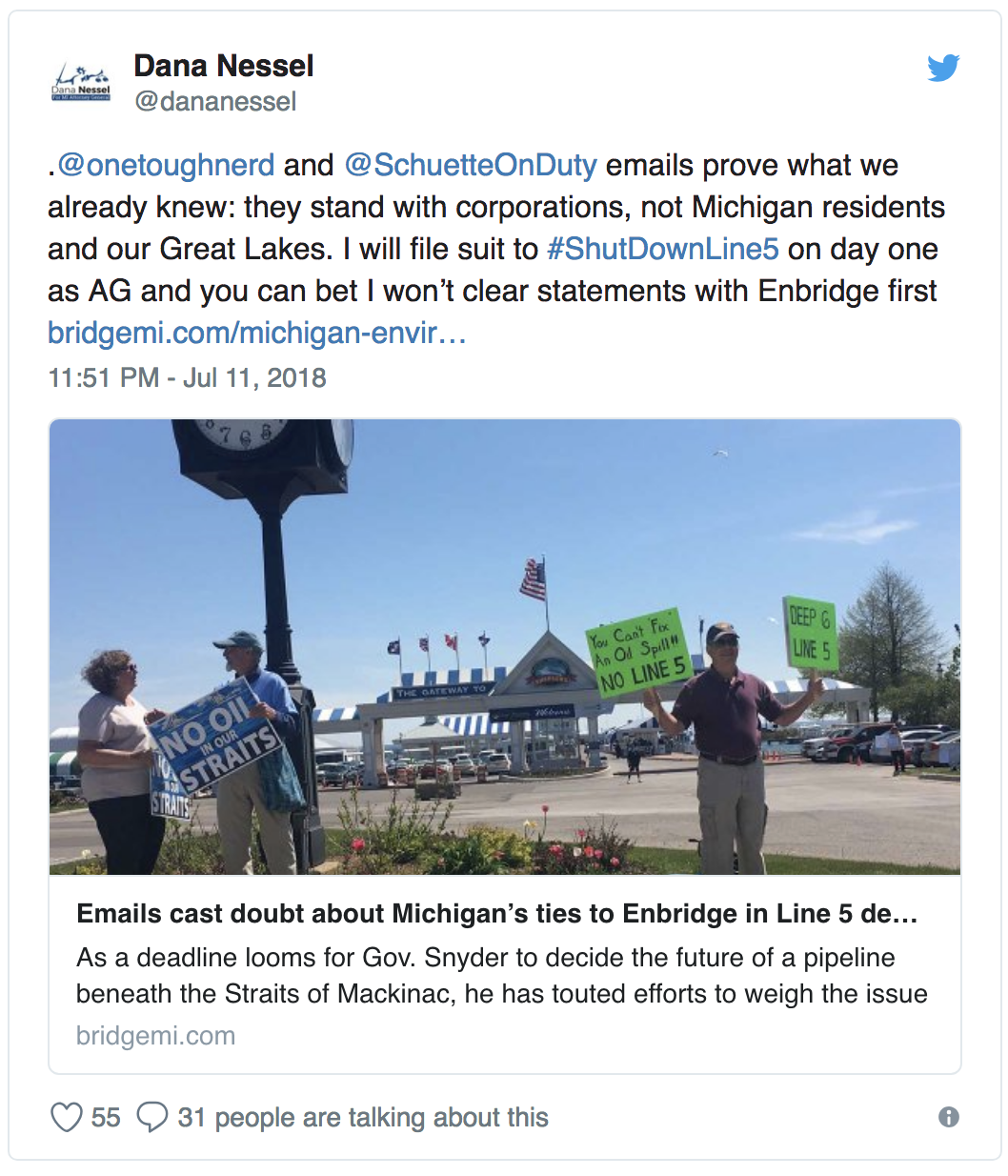 “On day one in office I will begin the legal process to decommission Line 5,” Whitmer said in a statement. “This aging, dangerous pipeline has been allowed to operate for far too long, putting our Great Lakes at risk. We can’t afford to sit around and wait for disaster to strike. We need Gov. Snyder and Bill Schuette to stop making excuses and announce an immediate plan to shut down Line 5.”

While critics want Snyder to shut down Line 5 immediately, he’s unlikely to do so. Responding to Holtz’s position that Snyder shouldn’t make a long-term decision on Line 5 so close to the election, Heaton said: “It is far easier to lob criticism than it is to come up with solutions to ought problems.”

The Snyder administration has maintained that there isn’t enough legal evidence to shut it down. Advocates also say Line 5 could be decommissioned without disrupting propane supplies to the Upper Peninsula, saying it could be delivered by rail or truck.

Despite uncertainty over Snyder’s agreement, Kirkwood said the next administration will likely have options on Line 5.

“I think it would be very difficult for this administration to bind the next one,” she said. “Ultimately, every administration must uphold the law as public trustees over the Great Lakes. An agreement with a private company cannot supersede those ongoing and perpetual duties of the governor of Michigan.”