It was the school dropoff that did it for Ty Schmidt. When he first moved to Traverse City, Michigan, about 11 years ago, he realized that the frustratingly long lines of cars in front of his son’s elementary school brought out the worst in everybody.

“I would just stand there, and I would count on one hand the kids walking to school. Mostly because they’re blocked by the cars, Schmidt said. “Who in their right mind would send their kids through this maze of cars? That bothered me a little bit.”

So, he did something about it. He organized a group of neighborhood kids to start biking to school with him, and he’d also sneak in tips on bike safety and “how not to be a knucklehead.” Eventually, what began as a single “bike train” of children pedaling to school spread to 18 groups every morning in neighborhoods across the city. 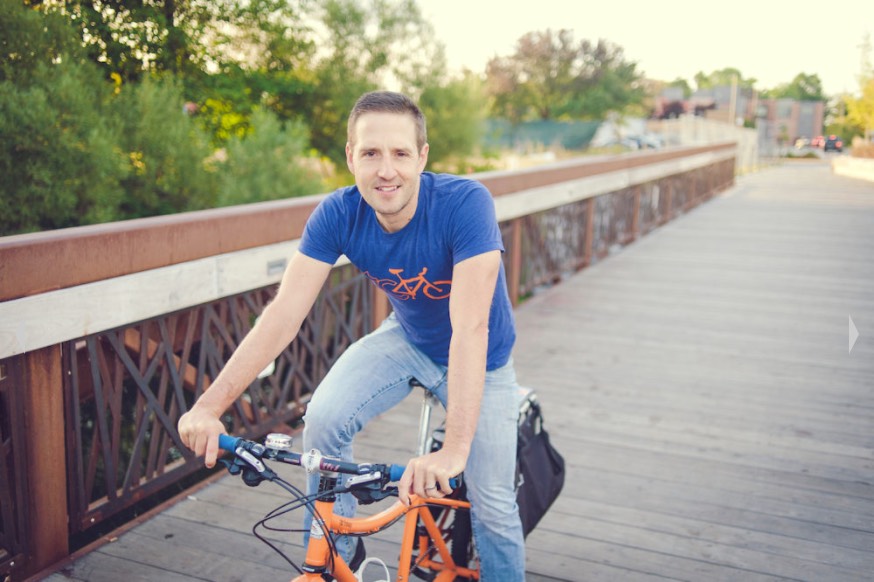 As cities around the country look for ways to cut emissions from the transportation sector, Schmidt’s approach could provide inspiration.

“Schools are the anchors of most neighborhoods,” Schmidt said. “So, we are pushing hard to make schools more walkable, bikeable, then in turn we would make the broader neighborhood. Traverse City has 10 schools, and if you draw a one-mile radius around each of those schools, you have the entire city. If you make them better connected, it doesn’t just allow kids to get to and from school, it allows everybody to get everywhere.”

Today, what Schmidt began has grown into a ubiquitous sight around the city, kids biking in their  orange-and-blue shirts that say “Norte,” the organization Schmidt built out of a true grass-roots bike movement. In fact a group of anonymous donors recently gave him a job-quitting $50,000 a year for three years so he can work on Norte full-time.

There’s a lot to build upon, from Smart Commute Week to National Cherry Festival valet service to even bike-powered snowplows. But the biggest thing is a seat at the political table in planning the future of the community. Mayoral and city commission candidates are eager to answer questions from Norte to discuss not whether, but how, Traverse City will become a more bike-friendly city.

“We don’t want to turn people into these 10-mile commute champions, but I’m really talking about that less-than-two mile trip,” Schmidt said, speaking about his plans to scale Norte from kids to adults. “And if you multiply that by a lot of people, that’s a lot less fossil fuels burned, that’s a lot less CO2 in the community. It’s a stronger, livable, healthier community.”

A key to discovering how that’s done, though, is to first explore how Schmidt, himself, became a bike-powered thought leader in Traverse City, and poised to take his message to surrounding communities.

Before he moved to Michigan, Schmidt grew up in Manitoba, but became a physical therapist in Tucson, Arizona, where he’d been a car driver, like everybody else. “I came out of college overweight, unhealthy, and my commute to work was 18 miles,” he said. “And I don’t do traffic well. I was 200 pounds. And I was, ‘you know what? This sucks. I’m going to go buy a bike.’ And it about killed me, riding 18 miles one way to go to work. But that’s how this started.

“It’s been 11 years, and I haven’t driven. Mostly because it’s just easy. It takes that off the table,”

Energy savings by embracing the bike

For Schmidt, transportation choices have not only an energy component but also a social one.

“I really feel like if neighborhoods get walkability and bikeability right, they get a lot of things right, including energy and affordable housing and the environment, the social web, knowing each other. Get people out on the sidewalk instead of their backyards.”

He sees Norte as part of an overall solution.

“I really feel that bicycles are a climate change solution. I don’t feel like we talk about that enough. I love what Traverse City is doing with green energy and the 20 percent renewables, and I love that, but I wish that we would talk a little bit about how we get ourselves around Traverse City.”

At least one city official believes Ty is creating the right kind of mindset for infrastructure change to happen.

“What Ty has done with Norte is nothing short of transformative,” said City Commissioner Gary Howe. “Every day he is normalizing the simple act of getting on a bike and rolling somewhere. This type of advocacy work is tantamount to a broader goal of reducing the community’s dependency on the automobile.

“And, from the political perspective, the more normalized walking and biking become, the greater the demand will be for creating a city that is more connected with safe, comfortable, and intuitive street and public space design.”

“Residents were ready to embrace year-round cycling as a mainstream transportation choice. And it certainly helps that the organization is youth focused with a visionary, enthusiastic, social media savvy leader like Ty,” Karner said.

It’s not that Schmidt doesn’t like cars. But the city has grown considerably in the past decade, so it’s time to think about congestion.

“Sure, just like the rest of the state, the Big Three Legacy is strong. And I knew that we started talking about bikes. You’ve got to tread lightly. I’m not anti-car, either. I love cars. It’s a great tool. I don’t have a driver’s license, but I do sit in cars,” he added with a smile.

But there is an element of competition, even resentment, between cyclists and car drivers. Sometimes it results in bad feelings, obscene hand gestures, or even worse. It could be a cultural clash, or more utilitarian, as new bike lanes begin competing with road space.

“That’s why I think it’s important that the message is that we’re all just people getting to places,” Schmidt said. “We’re not bicyclists or drivers. We’re just people. moms, dads, getting places.”

As for some cyclists blowing off stop signs or being “jerks on the street,” well that’s where Norte is helping, too. Classes are teaching kids how to be considerate, and pass drivers and pedestrians with “a ding, a save, and a smile.” He’s working for cycling to “get out of spandex and racing bikes,” and change the image to more utilitarian.

It’s why Norte is at the table in planning for about $2 million in upcoming infrastructure improvements around 10 schools. Norte is helping to determine the safest routes to school for kids.

“We realize we can’t just be cheerleaders and champions,” Schmidt said. “We can’t just get our megaphones out. We have to affect infrastructure. I hate meetings, but I can have a seat at the table now.”

And Norte is taking the message regional and, eventually statewide.

But by “scale up,” he does not necessarily mean create a larger Norte organization. Right now, Norte has a board of nine people, a support staff of six, then hundreds of volunteers. The secret to its growth is “microlocal.”

“I think change is local. And I think it’s even microlocal. I think it’s on the neighborhood scale. And I get bummed out about what’s happening in Washington. But instead of getting bummed out, I’m just going to make a difference where I live and empower people to do the same.”