A new presidential administration in 2021 will change the policy landscape for states that are working toward realizing ambitious carbon neutrality goals.

This fall, Gov. Gretchen Whitmer issued an executive order that made Michigan the latest state to adopt a goal of carbon neutrality by 2050. Realizing that goal will involve some big changes. One of the most important is moving toward a new kind of electricity grid — one that facilitates the continued deployment of renewable energy, energy storage, electric vehicle charging, energy management software and other innovations. 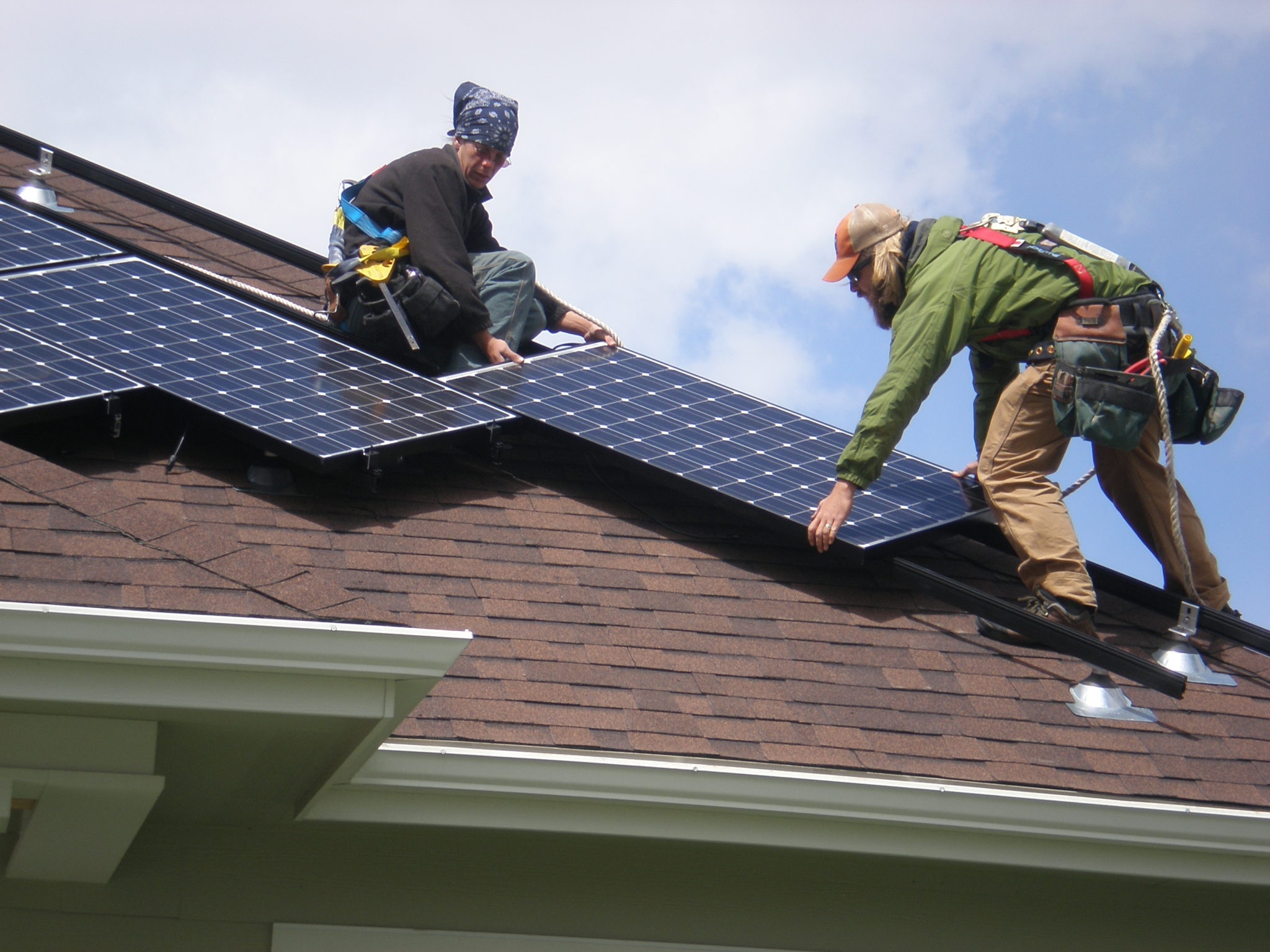 It was easy to miss, but in the weeks before the announcement of the carbon neutrality target, Michigan regulators took a small step toward ultimately realizing that grid of the future. This summer the Michigan Public Service Commission (MPSC) ordered the state’s major utilities to craft new plans for the distribution grid that are consistent with Gov. Whitmer and the MPSC’s recently-launched MI Power Grid initiative, which seeks “to maximize the benefits of the transition to clean, distributed energy resources,” as the governor’s office said when the initiative was unveiled late last year.

For Michiganders who work in advanced energy jobs like rooftop solar installation or electric vehicle engineering—which stood at over 125,000 jobs in Michigan alone pre-pandemic, according to E2’s Clean Jobs America report — this order is great news. But as the saying goes, old habits die hard. Planning for the energy transition has the potential to disrupt the status quo business and regulatory environment under which utilities have operated and have grown accustomed to over many decades. Advances in the costs and efficiencies of distributed energy resources (DERs), like rooftop solar and on-site battery storage, are reshaping how we think about the energy infrastructure that makes modern life possible, and Michigan energy consumers would miss out if they are not able to reap the benefits of this shift. The MPSC’s order on distribution system planning is the perfect opportunity to make sure Michigan does not get left behind as other states reform how they regulate the grid to take advantage of these developments.

Traditional distribution grid planning is focused on capital-intensive infrastructure projects designed to move power in one direction, from power plants to customers. But increasingly, alternatives exist that can unlock more efficient and affordable ways to maintain the reliability of electric service while also opening up opportunities for customers to better control their own electricity use and costs. New strategies for grid planning have emerged with the rise of DERs. A quick look at Michigan’s distribution grid reveals big problems that more sophisticated distribution grid planning that incorporates DERs could help address.

Michigan’s distribution grid sorely needs new investments. The state ranks as one of the worst in the country for electric reliability and the length of power outages. Much of that problem is related to utilities’ ability to manage the grid, such as regularly trimming trees so they do not knock down power lines, but it is also caused by aging infrastructure. Michigan utilities want to spend billions to fix the grid. DERs could defray the need for some of that spending by, for example, cutting electric load at peak times, which allows grid infrastructure to last longer. The investment will be large no matter what, but smarter planning could potentially save a chunk of those billions.

An example of how this can be done is through non-wires alternatives (NWAs), which use DERs, such as batteries, energy efficiency and demand response, to meet grid needs instead of using traditional “poles-and-wires” solutions. If a section of the grid is approaching its capacity limits, NWAs can provide a combination of local electricity generation as well as demand reductions that together can defer or avoid a traditional upgrade. Instead of investing in infrastructure, the utility would contract for services (e.g., capacity relief) from DERs. Grid operators should consider these flexible and innovative technologies any time a grid upgrade is required to accommodate more load. If the NWA is a more cost-effective solution, it should be pursued.

DTE Energy, Michigan’s largest electric utility, has piloted several NWA projects, but ultimately concluded that NWAs cannot be considered “a useful, practical and safe application” without further study, as the utility said in a filing with state regulators.

This conservative assessment may have been true a few years ago when the electric grid was largely centralized and distributed resources were more expensive, but that reality has changed this decade. Several states have already implemented innovative projects that integrate DERs into grid planning. Most notably, since 2014 New York City utility Consolidated Edison’s Brooklyn Queens Demand Management NWA project has saved money for ratepayers by delaying the need to build a substation and associated infrastructure to serve a densely populated part of the city experiencing load growth.

Each state is different and practically all of Michigan is less densely populated than New York City, but NWAs have also demonstrated value in suburban areas. In the mid-Hudson River Valley north of New York City, Central Hudson Gas & Electric Corp. has been running its Peak Perks demand management program, which helps participating customers reduce their peak load in the summer through tools like two-way WiFi thermostats. By cutting peak loads, the program “helps all of us in the Hudson Valley avoid the costs of constructing additional transmission lines and power plants built primarily to operate only during times of very high electricity demand for a handful of hours per year,” according to the utility. The program, which targets 16 MW of electric load, is substantially larger than any NWA pilots pursued by DTE and Consumers Energy to date.

Even though New York has a headstart on incorporating DERs into the grid, there are promising examples right here in Michigan. In October 2017 Consumers Energy launched the Swartz Creek Savers Club pilot project in a town near Flint. The project seeked to enroll residential customers into demand response programs that pay those customers to reduce their electric use on peak demand days. The result is that on hot summer days electric bills are lower and there is less strain on the grid than there would be if the Savers Club program did not exist.

The Swartz Creek project also enrolled residential and commercial customers into efficiency programs such as air conditioner tune ups and replacements and more efficient lighting and refrigeration. While utility efficiency programs are commonplace, those programs are aimed at achieving system-wide increases in efficiency. The differentiating feature of the Swartz Creek project is that it targets specific customers at specific points on the grid where, if load is reduced, expensive investments can be avoided.

A specific case where innovative solutions for the grid might be particularly helpful is Michigan’s Upper Peninsula (U.P.). U.P. ratepayers face some of the highest electricity rates in the country. The region makes up nearly 30% of the state’s land area but only about 3% of the population. Therefore, the high costs of electric infrastructure — not just the distribution grid, but also transmission lines and power plants — are spread out over a small number of ratepayers. At the same time, the U.P. is a particularly fertile ground for distributed energy. A 2016 Michigan Technological University study found that it could be economic for 65% of single-family homes in the U.P. and over 90% of seasonally-occupied homes to rely on their own energy from a combination of rooftop solar, batteries and combined heat and power generators — all examples of DERs. This is not to say that all of these ratepayers should cut themselves off from the grid, but more distributed energy could mitigate the problem of expensive electric service in the U.P. But as of now, DERs are not well integrated into the planning process for the electric grid in Michigan.

The problem is that with the current cost-of-service regulatory model, our investor-owned utilities (IOUs) are incentivized to favor the capital-intensive infrastructure approach. Without changes in the way the state regulates IOUs, alternatives to traditional utility infrastructure solutions may be treated more as an afterthought or remote future opportunity. And there would be little financial incentive for IOUs to scale-up promising programs that are currently being piloted, if they result in foregone opportunities to make future capital investments that are the primary driver of utility earnings.

That needs to change. One goal of the MPSC’s efforts under MI Power Grid should be to explore innovative utility incentive models so IOUs have just as much incentive to plan the grid around DERs as they currently do around traditional poles and wires. The goal is not to favor one or the other, but to put them on equal footing so that the most efficient, least-cost option wins out.