Reacting to Governor Gretchen Whitmer’s order to shut down the Enbridge Line 5 pipeline, the Michigan Public Service Commission today ordered that Administrative Law Judge Dennis Mack re-hear arguments about the scope of environmental impacts that can be considered in the siting permit review of the related oil pipeline tunnel Enbridge proposes building beneath the Mackinac Straits. 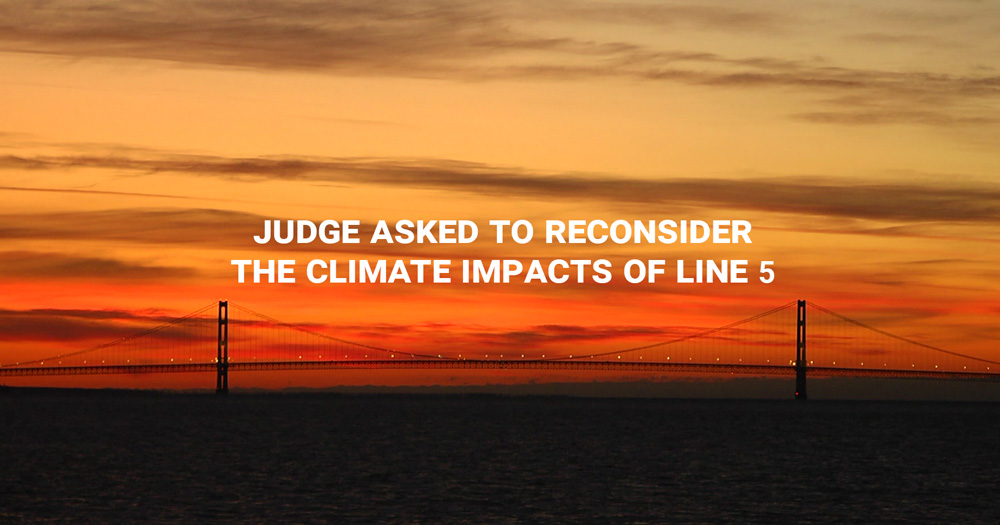 Lead attorneys at the Environmental Law & Policy Center see the MPSC’s decision as reflecting the fact that, by shutting down the existing Line 5 pipeline, a central principle of the permit case has changed. The proposed tunnel pipeline transitions from being a continuation of an existing pipeline to being an entirely new pipeline because it will be starting up years after the current Line 5 shuts down. The change in the tunnel pipeline status opens up the potential for a broader range of environmental considerations in the permit review, including evaluating the impact of greenhouse gases released by fuels carried in the pipeline.

ELPC and Michigan Climate Action Network teamed up to intervene in the oil pipeline tunnel permit case principally to ensure that greenhouse gas impacts from transported fuels be fully and accurately portrayed through expert testimony and data.

Considering climate change impacts of greenhouse gases from the fuels transported in the new tunnel pipeline fits with emerging trends in environmental law, as judges and commissions have come to more fully appreciate the compelling science and catastrophic impacts of climate change. Greenhouse gas emissions from extracted and/or transported fossil fuels have been considered in pipeline cases in Minnesota and Wisconsin and greenhouse gas impact assessments have been required in oil leasing cases in New Mexico, Montana, and elsewhere.

"This proposed tunnel is not simply a replacement of Line 5, it is new oil infrastructure ... that will release millions of tons of greenhouse gases every year at a time when climate scientists urge us to rapidly move off fossil fuels." - Kate Madigan, Director, Michigan Climate Action Network

The Michigan Environmental Protection Act does not limit the types of environmental impacts considered in permit hearings about projects like the oil pipeline tunnel. And most important, it certainly makes no sense, when considering environmental impacts, to willfully ignore climate change—the single greatest environmental challenge we face. Scientists have proven greenhouse gases can cause cataclysmic damage to Earth and diminish the futures of children, families, communities, and nations for decades and centuries to come.

The Environmental Law & Policy Center and Michigan Climate Action Network applaud the sound and plain reasoning that the MPSC expressed in this decision.

Margrethe Kearney, ELPC’s Senior Attorney, said: “We’re pleased the Commission recognized the impact of Governor Whitmer’s revocation of Enbridge’s easement to operate Line 5 in the Straits of Mackinac, forcing a shutdown of Line 5 this spring. Governor Whitmer’s bold action reaffirms that the Commission’s siting decision cannot assume that the existing Line 5 will operate indefinitely. Under Michigan law, the Commission must review information and evidence on the full environmental impact of building a new pipeline and tunnel that will dramatically increase greenhouse gas emissions.”

Kate Madigan, Director of Michigan Climate Action Network, said, “This proposed tunnel is not simply a replacement of Line 5, it is new oil infrastructure that comes with a 99-year lease that will result in continued transport of millions of gallons of oil every day through our state for decades, oil that will release millions of tons of greenhouse gases every year at a time when climate scientists urge us to rapidly move off fossil fuels.”