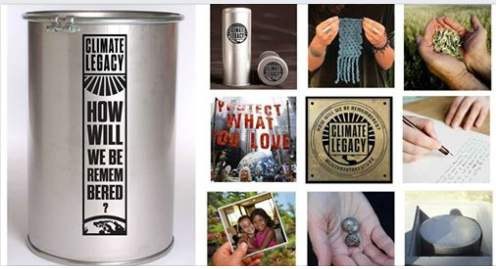 Organizers are dedicating a 50-year time capsule to record Michiganders' response to climate change, and air and water pollution. We'll celebrate everything we love about our state. We'll record which of our politicians are falling short while the world burns. And we'll bury a beautiful time capsule, not to be seen again until 2067.

The event will be interactive, inspiring, and family-friendly. We'll honestly face the threat that climate change and pollution pose to our home while ending up on the side of hope.

YOU ARE INVITED TO CONTRIBUTE TO THE TIME CAPSULE

-An object (small enough to fit in your palm) representing "what you love and want to protect" in the face of climate change and/or pollution.
-A letter to the future

World leaders are gathering in early November to decide what happens next with the Paris agreement. The U.S. will likely be represented by Rex Tillerson, who will be doing everything possible to weaken Paris and enrich his fellow oil executives like himself. We the people need to get together and send a different message.

But rather than have another rally (it’s been a year of many rallies), we decided to do something a little different.

We're meeting on the 18th to dedicate the Climate Legacy Time Capsule. We’ll offer our descendants a glimpse of how Michiganders are responding to climate change at this critical moment in history--both the good and the bad.

The good: People everywhere are standing up to defend our home and each other. We’ll add objects and letters to the time capsule representing what we love and are fighting to protect. In dedicating the time capsule, we’ll dedicate ourselves to fighting even harder for a better world.

The bad: Too many politicians are falling short of what we need from them. Each politician has a choice between now and November 18. Those who pledge to uphold the Paris agreement, and back up their pledge with real action, will be invited to contribute to the time capsule. All who fall short will be recorded, and remembered, for failing us in a time of crisis.

Gov. candidate Abdul El-Sayed will be speaking! We have also invited the other candidates for governor.