From his office at Manthei Landscape Supply, Peter Manthei can tell you how much energy is being produced at his family’s solar array in Charlevoix. 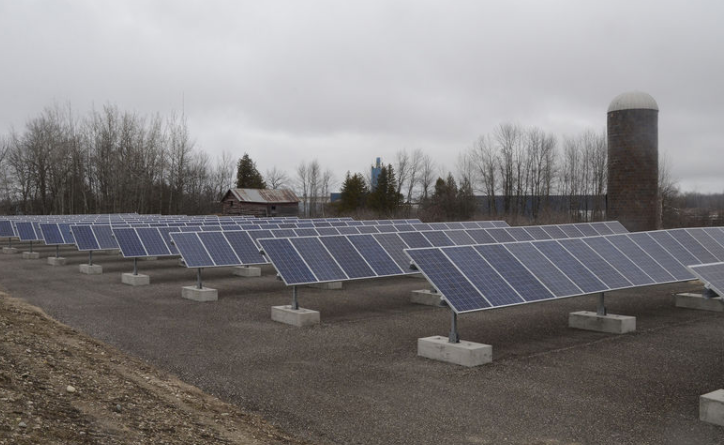 “These peaks are sunny days, while these marks represent cloudy or snowy days,” Manthei said.

The monitor uses a simple bar graph to display the amount of energy generated by the array — as well as the energy consumed by the manufacturing plant — on an hourly basis.

With just a click of the computer mouse, you can see the data charted by the day, week and month. The monitor makes it easy to see how on cloudy days, the demand for energy use outpaces the amount being generated by solar cells, while on sunny days, power generation more closely matches demand.

“When it is sunny all day we produce quite a bit of energy,” Manthei said. “It is quite a bit of power at 545 kilowatts on a sunny day. When we are producing more than 500 kilowatts that is good.”

Solar cells, also called photovoltaic (PV) cells by scientists, convert sunlight directly into electricity. PV gets its name from the process of converting light (photons) to electricity (voltage), which is called the PV effect.

As the season changes to summer and the days get longer, Manthei expects the kilowatts will go up.

“When the days get longer as we come into summer we can produce more compared to what we are seeing now,” Manthei said.

Manthei said before the current plant expansion the solar field was expected to provide 30 percent of the factory’s energy needs.

“That was our predictions before we expanded,” Manthei said. “I expect that number will be lower when the expansion comes online.”

Manthei began exploring the use of solar after attending a brewer’s guild conference where he learned a local brewery was installing solar panels at its production plant.

“There was a representative speaking about clean energy and how Short’s Brewing installed solar power,” Manthei said. “When I saw Short's was using solar in Elk Rapids I started to explore this.”

A couple of reasons to purchase the solar array were to invest in renewables and add energy costs savings, Manthei said.

“I found out solar power works in Northern Michigan and I thought this would be good for us from a sustainability standpoint,” he said. “Also it is hard to see energy costs going down as usage is going up around the world.”