In the U.S., most sweet cherries come from Washington, Michigan, California, Oregon, and Wisconsin. Among many other crops, Washington and Michigan growers are concerned about the impact to cherry yields due to our changing climate. Here’s what’s happening with cherries in our two states and some encouraging discussions.

Michigan farmers experienced a late frost that soured the 2015 cherry season by about a third. This was another of many seasons for a diminished crop. In 2002, farmers experienced what they thought was a once-in-a-lifetime, total loss season. But in 2012, an extremely warm week in March was followed by extreme cold and wind that wiped out the crop.

Gary Bardenhagen farms tart cherries in Leelanau County, Michigan, and feels that the likelihood of crop damage from a frost event is increasing. He lost all of his crop in 2012 and half his crop in 2015.

“I believe climate change is having an impact on our weather,” he said. “It’s becoming more common to have a warm spell in February or early March which melts all the snow and stimulates the trees to move out of dormancy prematurely. The early starts to spring however, do not preclude a late frost event, which can cause damage to the crop.” 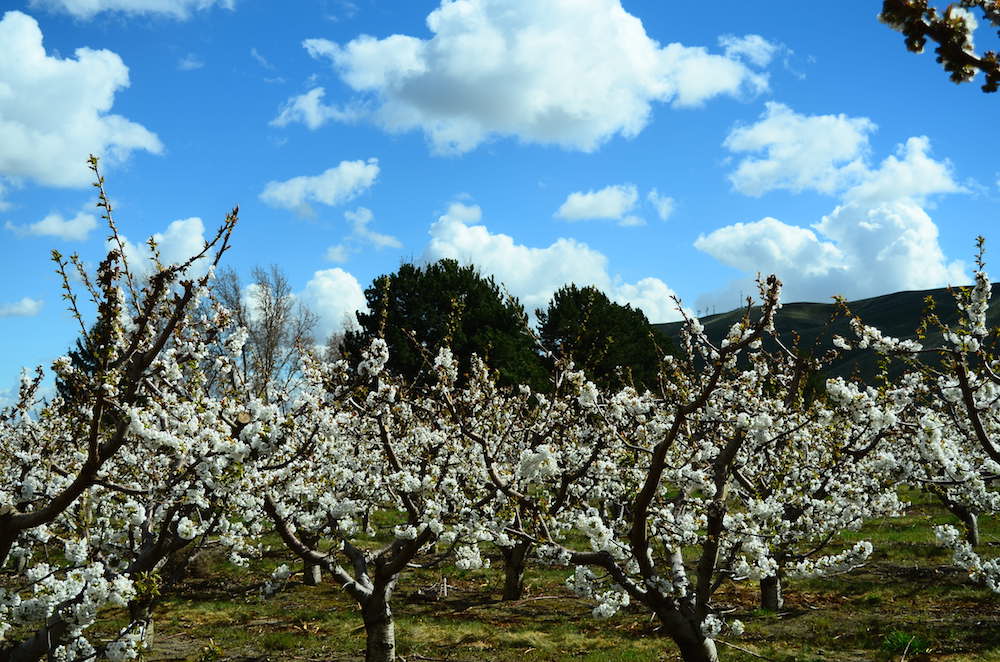 Kevin Achelpohl, owner of K&C Farms in Mattawa, Washington, said, “In June, we had 100-degree plus weather. We had another heat wave in July. I feel like it’s getting warmer. I had 95% damage on one new block before spring. That happened in November from a late heat wave and sudden cold snap. I saw some sunburn on my Rainier cherries. I dodged all the rain. But the last thing I was thinking was about sunburn. An hour in those types of temperatures can really shorten the life of the cherry. It’s quite a bit more hectic to pick in 95 degree weather but in 105-107 degree weather, it’s very hard. Those 100-degree days did not give the fruit a chance to cool down overnight. You get a shorter picking window in the daytime. You have to be finished and quit picking when it’s too warm because the fruit gets too warm, gets soft, and separates from the stems.”

“An average year? We don’t really know what that is anymore,” Achelpohl said.

Robin French, Ray French Orchards, Richland, Washington, has farmed here since the mid-1960s. French said, “As far as the warming, we’ve had a lot of hot summers. But I’ve never seen a hot June, never! I counted 7 days over 100 degrees F in June. We harvested our Bings from June 8-12. Monday, June 8 was 105 degrees F, 24 degrees higher than normal (usually 81-82 degrees F for that time period).”

Agricultural workers risk illness and death in such conditions.

Tim Smith, Washington State University Extension tree fruit specialist emeritus, explained: “The fact is that the weather is so unpredictable and we keep setting records of all sorts. When you have hundreds of years of records and you continue to see the hottest month ever for almost every month during the summer, it tends to tell me something. What I think we are experiencing is screwed-up weather because of climate change.”

Nikki Rothwell, Coordinator at the Northwest Michigan Horticultural Research Center has begun to see a shift in farmers’ thinking in her region. At a carbon, climate and energy discussion in March 2013, all of the 15 stakeholder participants agreed the discussion on climate variability and agriculture was beneficial to their farm operation, and all would like to participate in future discussions.

What You Can Do

Talk with one of our nation’s 3.2 million farmers and learn about the impact our changing climate is having on their crops. There is only so much they can do to adapt. Tell them about the Carbon Fee-and-Dividend solution — over a piece of cherry pie.