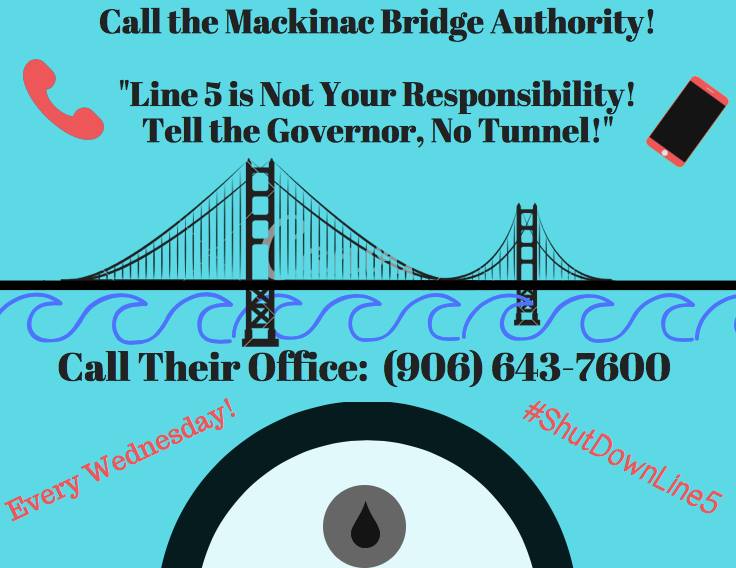 Governor Snyder has ignored the people of Michigan and has fully backed Enbridge's Line 5 Tunnel! Bill Schuette still has the responsibility as Attorney General to enforce the 1953 Agreement, and protect Michigan and the Great Lakes! Call his office EVERY TUESDAY Now through the Election! Let's hold AG Schuette accountable to protecting the Great Lakes. The Tunnel is NOT an OPTION!

Talking Points:
~This is not a solution for Michigan, but a solution for Enbridge to keep the Mackinac Straits at risk from their Line 5 oil pipelines and for Canada to get its oil processed using Michigan as a shortcut.

~Line 5 faces multiple threats that will remain in place while a new Canadian tunnel is built through the Straits.

~A worst-case scenario of a Mackinac Straits rupture would leak more than 2 million gallons of oil, contaminating 437 miles of Great Lakes shoreline, and cost $1.86 billion in damages, according to a study spearheaded by Professor Guy Meadows from Michigan Technological University.

~This threat will remain in place for 7 to 10 years while an oil pipeline is constructed for Canada.

~Even after a Line 5 oil tunnel is built, the oil pipeline will remain a permanent threat across its entire 645-mile length, putting more than 200 waterways at risk, including the storied AuSable River and watersheds that flow directly into Lake Michigan.

~Fossil fuel is on its way out thanks to a rapid transition to cleaner energy sources. This tunnel will be a stranded asset when the cost of producing energy from fossil fuel becomes more expensive than from using renewables like wind and solar. In the near future, the State will be on the hook for a tunnel that is no longer financially feasible.