What’s next for Line 5: studies, permits and ‘inevitable’ lawsuits

A three-member board overseeing the tunnel project for the state is scheduled to hold its first meeting Wednesday.

With a legislative and legal framework in place to build a tunnel for Enbridge’s Line 5 pipeline in the Straits of Mackinac, attention now shifts to a board overseeing the project, geological studies, and potential lawsuits.

Michigan’s Republican governor, Rick Snyder, last week swiftly approved legislation, appointed members to the newly created Mackinac Straits Corridor Authority, and presented two draft agreements meant to lock in the project before his Democratic successor takes office next month. Public comments on the agreements will be taken through Dec. 18 — five days after the agreements were announced.

As outlined in an earlier agreement between the state and Enbridge, the authority would ultimately be required to approve the “tunnel agreement” if it meets a set of criteria under legislation passed on Dec. 12. The authority — which would own the tunnel after it’s built and lease it to Enbridge — holds its first meeting Wednesday in the Upper Peninsula.

At least one appointee to the Mackinac Straits Corridor Authority — a three-member board overseeing construction and operation of the tunnel — said permitting, geotechnical studies, economic and political considerations will take place before construction begins. A geotechnical report is required by the end of 2019, according to the agreement. 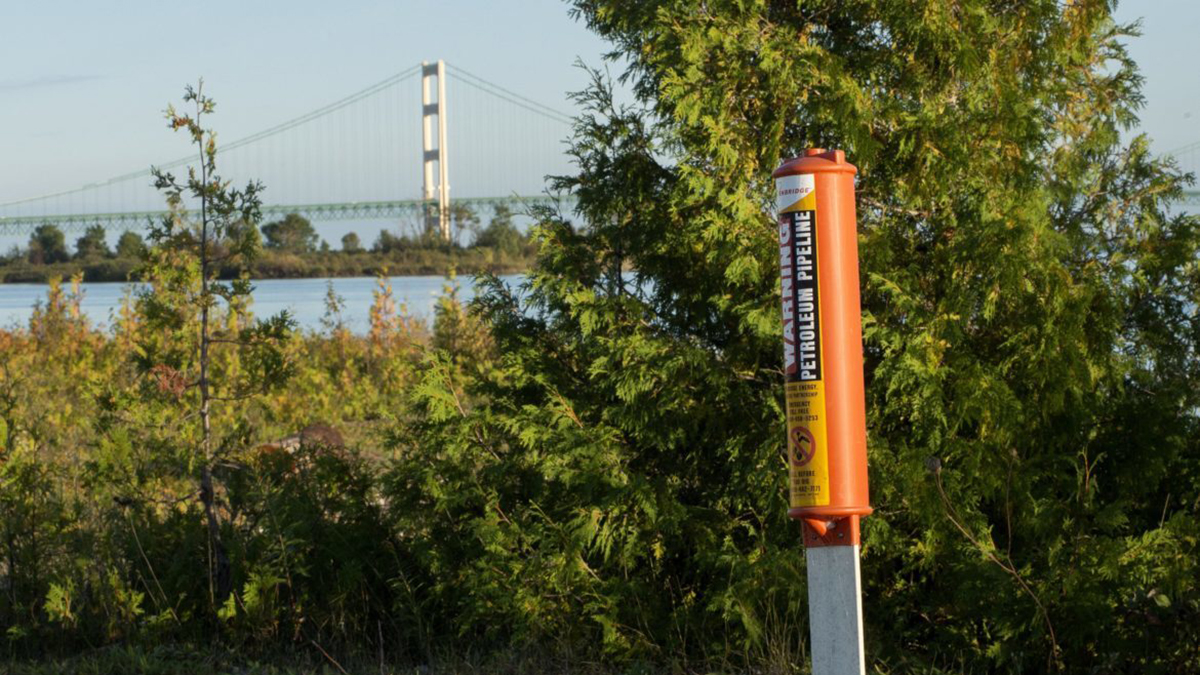 Though he expects the process to move forward as planned, circumstances could change in the coming months and years.

“There are some things that have to be done between now and actually starting to dig a tunnel that could stop it,” said Anthony England, dean of the University of Michigan-Dearborn’s College of Engineering and Computer Science. “Permitting and the public concern must be taken into account. It’s not the authority’s business to do that, but it is a political question.”

‘If it moves forward … it’s our job to make sure this project is done well and transparently.’

Enbridge has applied for permits to study the geology in the Straits that will “guide the design” of the tunnel, company spokesperson Ryan Duffy said.

While England said it would be a “surprise” if additional geological challenges make the project more difficult or expensive, “you can’t be sure until you actually do it.”

“If it moves forward and the technology and geology cooperate, it’s our job to make sure this project is done well and transparently so the public understands what’s going on,” England said.

‘Committed to this process’

Critics have raised questions about whether the project — which could cost at least hundreds of millions of dollars but allow Line 5 to operate for 99 years — makes economic sense amid the shift away from fossil fuels to address climate change.

“Maybe the real message is: Enbridge will never build the tunnel,” said Liz Kirkwood, executive director of For Love of Water, which supports closing Line 5. “Maybe this is a little bit of grandstanding, we don’t know. There are too many unanswered questions and it’s irresponsible for this type of legislation to be rammed down in the final weeks of this lame duck governor.”

Kirkwood added that this approach could benefit Enbridge by buying it several years of time while it determines another method of moving its oil from Wisconsin to Canada. Separately, a solution could be found to continue supplying the Upper Peninsula with propane.

“It provides cover and security for their shareholders,” she said. “The tunnel agreement guarantees the state will basically waive any violations currently under the 1953 easement. It’s a pretty beautiful solution for them.”

The latest draft agreement outlines a series of deadlines related to engineering and geotechnical studies, as well as potential fines for not meeting deadlines. Within the next few years, Enbridge is required to submit a “construction execution plan” that includes a schedule and milestones. Should the company make “material changes” to the plan, it must get authority approval.

However, the agreement also says the company’s “performance of its responsibilities” related to the project is “subject to and conditioned upon the approval by the Enbridge Board of Directors of the expenditure of sufficient funds for those purposes.”

England says Enbridge is unlikely to have gone this far in negotiations if it wasn’t economically feasible, “but you can’t be sure a couple years from now they wouldn’t see this differently. If they did, that would put the continued operation of Line 5 in doubt. … It’s got to make sense to (Enbridge) at the end of the day.”

Should Enbridge call the project into question at some point, “We’ll have an obligation to report that to the state,” England said.

Asked if the company has made a final determination about whether the project is economically feasible and a prudent investment, Duffy said the company is “committed to this process.”

An October agreement between Enbridge and the state, he added, “makes very clear our commitment to pursuing the tunnel project and pipeline replacement. And we firmly believe that this can be done within the seven- to 10-year timeframe. The tunnel replacement project makes a safe pipeline safer while ensuring a reliable and affordable energy supply to Michigan and the region.”

‘If there’s going to be a transfer of oil through the Straits, the tunnel is the best solution.’

State Sen. Tom Casperson, a term-limited Upper Peninsula Republican who ushered the tunnel legislation, said he doesn’t “see the gain” for Enbridge to back out in the future.

“I don’t know how they win the public PR battle ultimately,” Casperson said.

Pipeline critics also say the state has lacked due diligence on the tunnel related to climate change: If the U.S. and world continue on a path of electrification, how much longer would Line 5 be necessary?

England doesn’t doubt the science of climate change or the need the curb greenhouse gas emissions. But he says it won’t happen overnight. Additionally, U.S. imports of Canadian crude oil have more than doubled since 2012 and are expected to increase by 2020, according to a recent report by IHS Markit.

“I’m not making a judgment on the carbon future or anything,” England said. “If there’s going to be a transfer of oil through the Straits, the tunnel is the best solution.”

He says the advantages of a tunnel include a secondary containment between the pipeline and the bedrock, as well as the potential to hold transmission and cable lines.

Meanwhile, opponents of the plan say legal challenges are “inevitable.”

“We don’t expect this new authority to stand for very long — there’s no way this passes constitutional muster,” said Sean McBrearty, a spokesperson with the Oil & Water Don’t Mix campaign.

He said the new law “leaves several potential avenues for legal challenges based on the state constitution. There’s all sorts of legal paths we could take.” Those may include revoking an easement allowing for Line 5 in the Straits, McBrearty said, though it’s unclear whether that could happen under the new agreement.

Questions also remain about potential legal action by Gov.-elect Gretchen Whitmer or Attorney General-elect Dana Nessel, both Democrats. Nessel reportedly said this week that the plans haven’t been properly vetted and will have “negative repercussions … for generations.”

Whitmer’s transition team issued a statement affirming her position that Line 5 “poses a serious risk to the Great Lakes, to Michigan’s economy, and to our way of life.”

“The Governor-elect’s transition team is reviewing a range of issues surrounding Line 5 so that she and her team are ready to act in a manner that is most effective for the safety of the Great Lakes and Michigan residents after January 1,” the statement says.

Published by Midwest Energy News and used with permission