This year brought a changing landscape and big opportunities for climate action in Michigan. Public concern has reached a point where a majority of Americans are now concerned about and support action on climate. The latest scientific research, including the 2018 Intergovernmental Panel on Climate Change report, is sounding the alarm about the need for major emissions cuts this decade to avoid the worst consequences. These reports and bold solutions in Congress are getting national media attention, and we are seeing more states, cities, and businesses working to decarbonize. We have also elected new leaders who are making the climate a priority, including Michigan’s new governor.

We now have an important opportunity to act on climate in Michigan, and we have not a moment to lose as the impacts we are already seeing - from devastating wildfires in California, hurricanes in Florida and Puerto Rico, and life-threatening Polar vortex events in Michigan - will only continue to worsen.

The Michigan Climate Action Network (MiCAN) was formed to put Michigan on a path to a stable and just climate through our three-pronged strategy to build a stronger and more connected climate movement in Michigan; support policies that advance clean energy solutions; and elevate climate change to be a top issue in the state. This report highlights our 2018 work toward these important goals.

Growing the Climate Network - In 2018 MiCAN grew to a network of 50 organizations and businesses and 18,000 individuals who we reach each month. We added staff capacity this year by increasing the time of our Executive Director, our Communications Director, and by adding a half-time support staff person. We also created a larger and more diverse movement for climate action, partnering with many statewide climate and clean energy coalitions - like Oil & Water Don’t Mix, Empower Michigan, and the Michigan Energy, Michigan Jobs coalition, and national networks including US Climate Action Network.

People’s Climate Movement - MiCAN played a lead role in the People’s Climate Movement coalition in Michigan, developing a strong working relationship with one of the nation’s leading grassroots climate groups, and building stronger partnerships with tribes, environmental justice, youth, faith, and labor groups. Together we organized the MiCAN also helped organize the Line 5 Pipe Out Paddle Protest event in Mackinaw City led by the Little Traverse Bay Bands of Odawa Indians, and we created a video promoting that event, which helped turn out over 300 people on a rainy day - three times the previous years’ attendance. Overall, we made valuable new partnerships and took important steps toward building a truly intersectional climate movement in Michigan. Watch the video of all the PCM events we participated in. 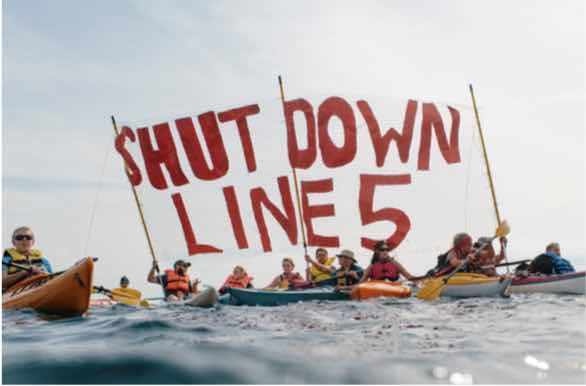 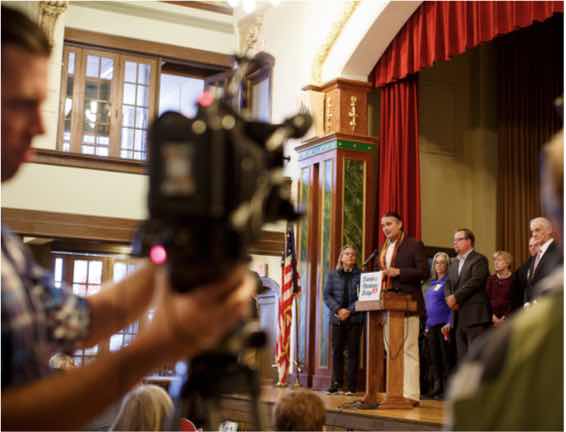 Climate Summit – In late 2018 we began to organize the Michigan Climate Action Summit, the first statewide public gathering focused on climate action, which we held in February 2019 in Grand Rapids. The Summit brought together a crowd of 300 people, and featuring speakers including Grand Rapids Mayor Rosalynn Bliss, U of M Dean and Nobel Prize-winning climate scientist Jonathan Overpeck, and Michigan EGLE Director Liesl Clark who told our crowd that Michigan’s new governor is with us on climate (watch her address). The event exceeded expectations, elevated climate and the need for action in our state, and helped to start moving forward a bold climate agenda for Michigan, the work we will continue in 2019. 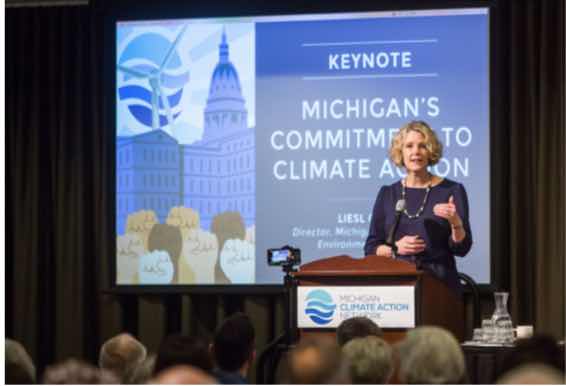 ELEVATE CLIMATE AS A TOP ISSUE IN MICHIGAN, ESPECIALLY DURING THE ELECTION YEAR

Climate in the Media - MiCAN generated dozens of stories on climate this year in newspapers, television news, and radio programs. Highlights include stories about the 100% clean energy goals in Midwest Energy News, and Michigan Public Radio, and two AP stories on clean energy that were picked up in newspapers nationwide. We also got four op-eds on climate and clean energy placed this year in Bridge Magazine and the Detroit Free Press, including one authored by Traverse City Mayor Jim Carruthers.

Get Out the Climate Vote – MiCAN used our social media platform to encourage people to vote and used focused targeting to reach more young people. We created and shared a Get Out the Vote video that reached 60,000 people on Facebook and got 8,600 views on Twitter in the last few weeks before the election. We also launched a Pledge to Vote Climate website and social media campaign, and 1933 people signed the pledge. We then emailed and texted reminders to all of those people the day before Election Day and an additional 2,000 people. We shared many social media posts around election day reminding people to vote. While it is impossible to quantify how many people we got to the polls, we touched thousands of voters with these efforts. 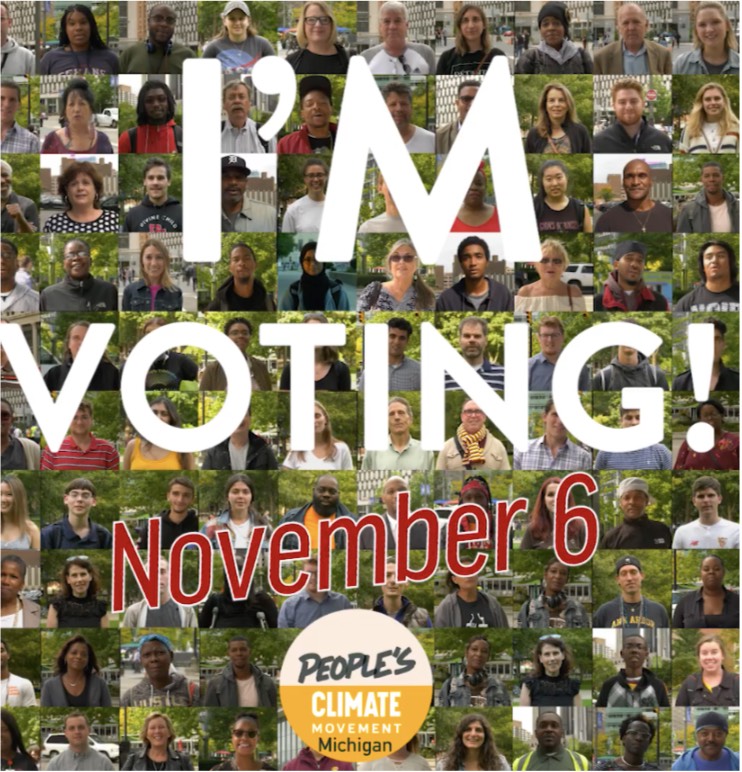 Climate candidate education – The 2018 election was an important opportunity to educate candidates about climate change. We developed a social media campaign encouraging MiCAN supporters to talk to candidates about climate, and helping turn out people to candidate events, including outside of the two Gubernatorial debates in October in Grand Rapids and Detroit. We developed a climate policy fact sheet and shared with the gubernatorial candidates and attorney general candidates between the primary and general elections. We also developed detailed climate policy recommendations that we shared with the Whitmer transition team after the election.

Building the Biggest Social Media Platform - We have used cutting-edge strategies to build our social media presence to nearly 20,000 followers, giving MiCAN one of the largest social media audiences of any environmental group in Michigan. This is a powerful tool that allowed us to reach an average of 93,000 people per month over 2018 and more than 376,000 people in August alone. We found the four videos we created and shared were the most effective way to reach large numbers of people. Our short video about the TCLP 100% goal reached 250,000 through social media in just two weeks. 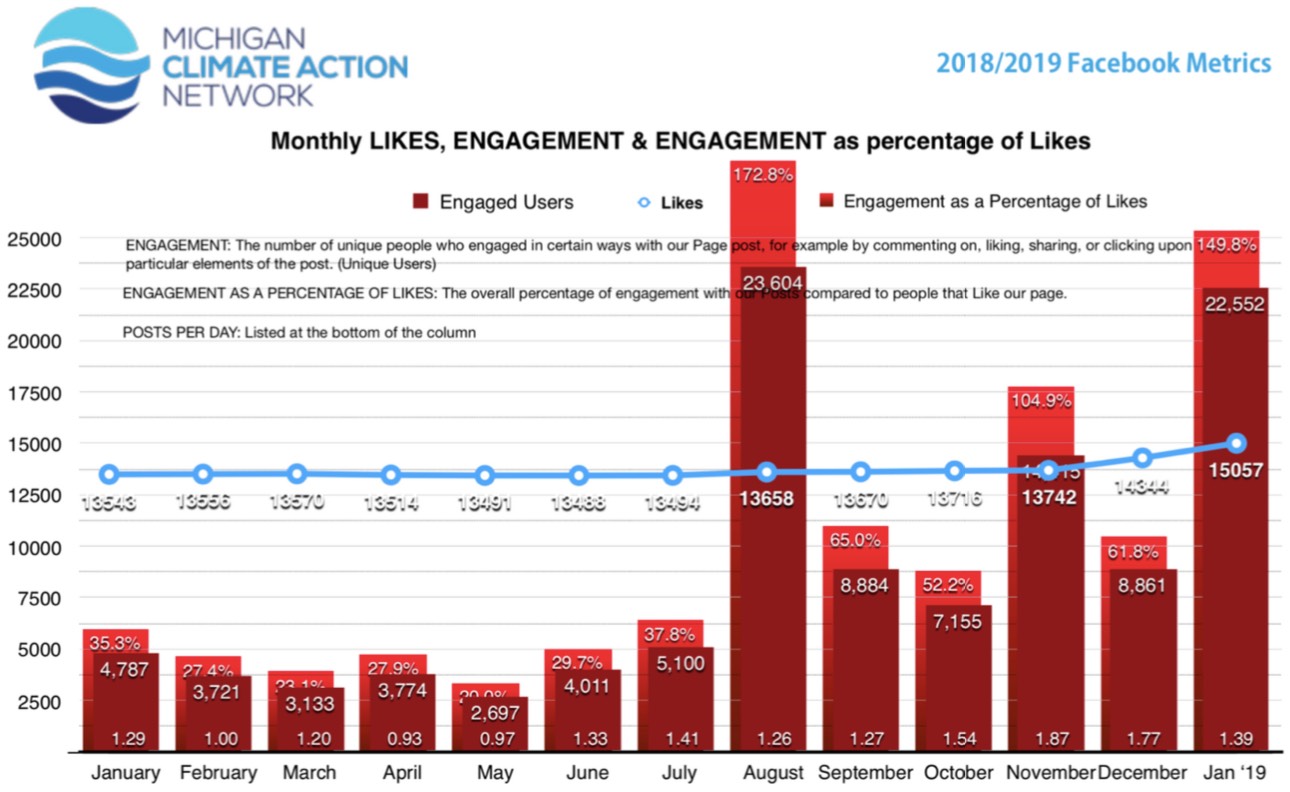 Passing 100% Clean Energy Goals - MiCAN led the effort that passed the first community-wide 100% clean energy goal in Michigan passed by Traverse City Light & Power (TCLP) in August. We led a coalition of activists, generated letters of support signed by more than 250 Traverse City residents, turned out more than a dozen people to make comment at TCLP meetings, and working with the Great Lakes Business Network and local allies we sent letters from local businesses in support. To encourage other communities to pass big clean energy goals we promoted this goal widely through social media and traditional media.

We also were instrumental in getting the University of Michigan to pledge to be carbon neutral, which the university president announced in October.

This was the result of great advocacy work by many students, faculty, alumni, and Ann Arbor leaders, including MiCAN member organizations, a member of MiCAN’s steering committee, and a MiCAN Intern.

Supporting Statewide Clean Energy Policy - We engaged our network behind key legislation and Public Service Commission (MPSC) rulings, generating over 300 comments on a letter to DTE Energy and the MPSC opposing its proposed natural gas plant.

After years of MiCAN and many partner groups advocating for climate action and clean energy in Michigan, in 2018 the two largest utilities announced important steps toward clean energy. Consumers Energy and DTE Energy both agreed to increase renewables to 25% by 2025 plus an increase of 25% in energy efficiency, and both announced plans to reduce carbon emissions by 80 percent by 2040 and 2050 respectively. While there is much to be done to shore up these commitments and get coal plants to retire earlier, this is important progress.

MiCAN is proud of the work we did in 2018, and this progress would not have been possible without the participation of our members and the financial support of our donors. Our new partnerships, increased capacity, the splash we made at the Climate Summit, and the new pro-climate administration in Michigan sets us up for more climate wins in 2019.

We are at an inflection point on climate in many ways. We know that this decade is so critical, and we know the policies that are possible to move our state to be a clean energy and climate leader. We intend to seize this moment and settle for nothing less. 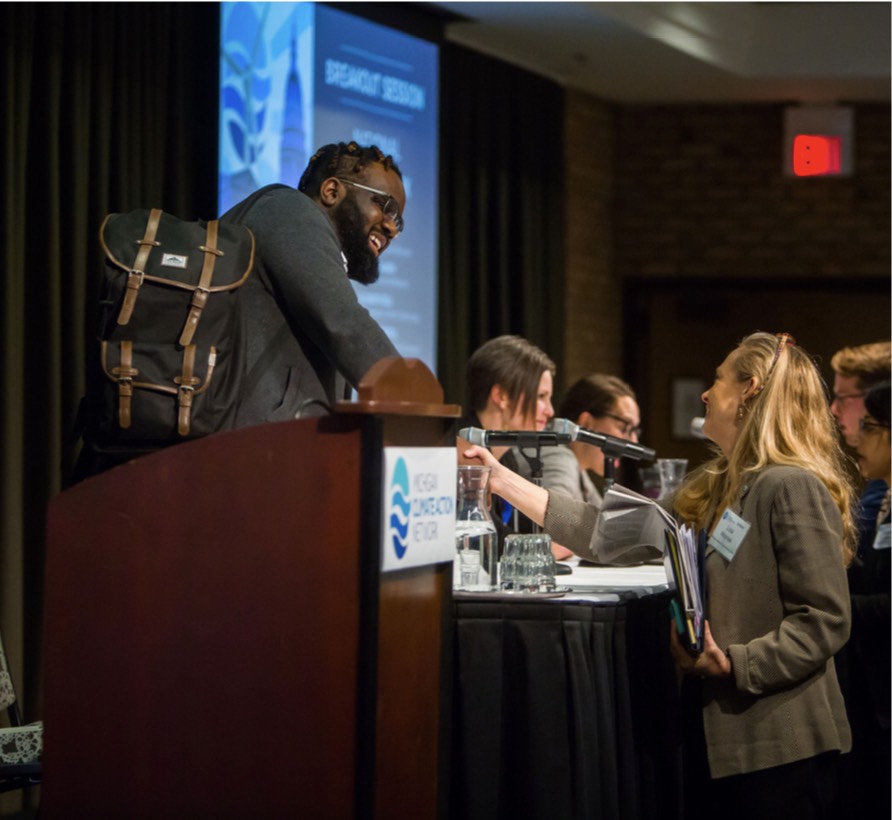